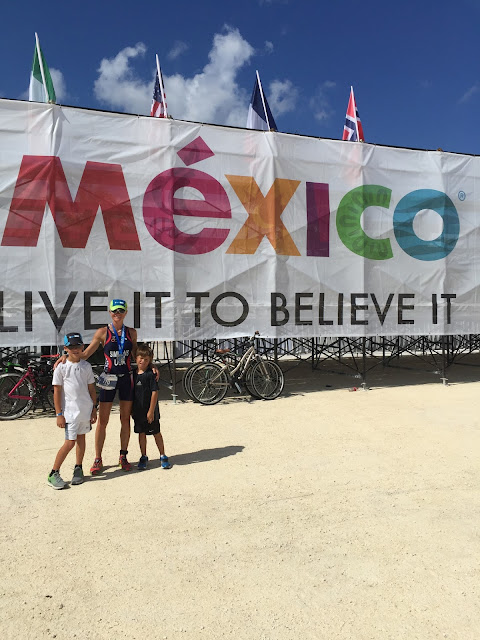 I am all smiles in this picture and I have a little racing recap to share.  This was an epic race for me.  The most memorable one to date.( It has been over a year and it still remains one of my proudest moments and not because I won, but because I persevered.)

All ready to race.  The temperatures were in the 90s with 100% humidity.  I was racing later in the day than the Sprint race earlier in the week so I knew the run was going to be a scorcher.  It's okay, I am a runner and I do better than most in the heat.  Bring it.  The swim was in the beautiful ocean and I was ready for it.  It is by far the weakest link for me but I had already raced in the water once and it was so beautiful it took a little edge off and to boot they shortened the course due to the strength of the current.  Super!!!  When the gun fired we were to the first buoy in minutes and then the current hit us.  I swear for every 2 strokes I made I took 4 back.  Nonetheless, I was cruising and felt great.  I was in the front group...which never happens.  The next thing I know one of the officials tells me I missed a turn and have to go back (or I get a DQ)!  Really, how could this happen?  I sighted wrong and the current had pushed me off course.  Determined not to be outdone I headed back and approached the turn just as the second wave of swimmers was making the turn.  I was trapped!  I was trapped under the water and under the buoy!  I couldn't get out!  The current, the buoy and the thrashing of other swimmers had me trapped.  I never thought I would need swim support.  I'm not the best in the water BUT I AM a STRONG swimmer.  The scuba guys saw my distress and were able to get the buoy off of me so I could get back to the surface.  I was panicked and devastated.  At that moment, I knew my race for the podium was over.  I was sure I would be the last one out of the water.  I was in tears as I pulled myself out of the water and onto the dock. I saw David and right then and there I decided we didn't travel all the way to Mexico for me to throw a fit and finish last! I had the best two legs left to go.  I am great on the bike and I am strong on the run.  "I can do this", was all I kept repeating.  Suck it up buttercup and RACE.  I am a fierce competitor and I gave it everything I had to get back in that race.
I had an amazing bike leg.  I was passing folks right and left.  I was back in the game.  I had no idea what place I was in, I didn't care.  I could have still been last for all I knew, but my brain was telling me to kick tail no matter what.  That is what I do. That is what I did!  I came off the bike renewed in T2.  Ugh, it was so HOT.  The run was that of attrition.  I kept replaying the last words of advice my coach gave to me...."it's going to be hot and you are going to have to slow down on the run. It will be a run of attrition, who can hang in the heat".  It was rough, by far the hottest racing condition for me yet, but I kept on running.  Most were walking and lots were simply falling over on the course and medical was everywhere taking people off the course.  I'm not kidding, it was a scorcher of a day and it's like the desert out there.  Not one stitch of shade.  Head up on the loops in search of David and the boys.  They will never know how much seeing their faces in the crowds of people kept me going.  Their constant cheers urging me forward and closer to the finish!
I finished!  Race number 2 and my third world championships in the bag.  It was hard and it was scary but I did not give up.  And you know what?  I finished third!!!  I made the podium and represented the USA on the stage for the first time.  This race was a testament to me and to my boys that you don't ever give up.  Believe in yourself, stay focused and don't ever give up.