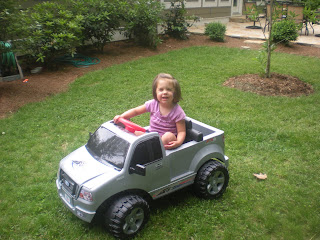 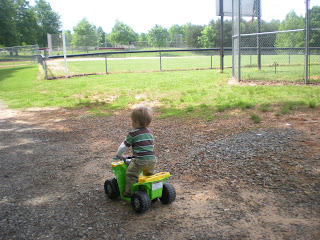 Riding his 4 wheeler all around the ball field in Pilot Mountain. He is showing some skill in this pic! 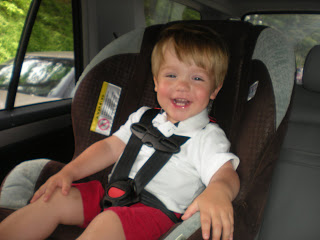 Just a really cute picture. He was waiting patiently for a really long red light. 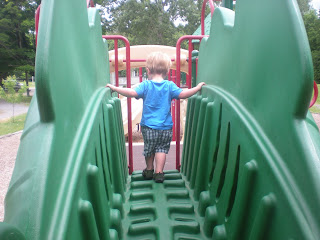 Doing it all by himself. sniff, sniff 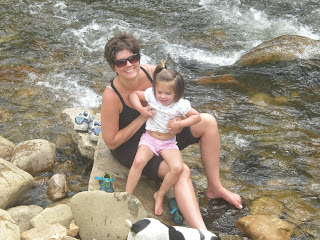 Fun in Damascus! We took a bike ride to the park on the Creeper Trail. Yes, Abby rode in the bike buggy too! 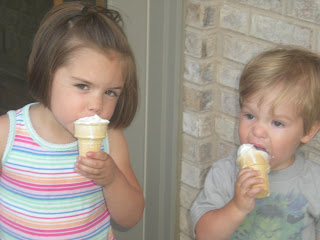 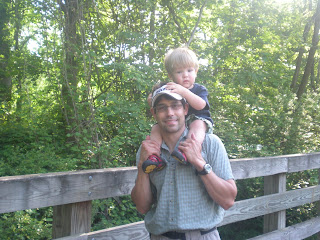 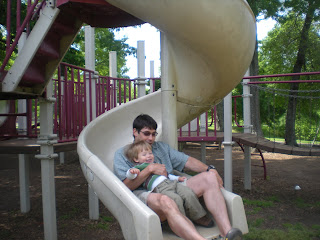 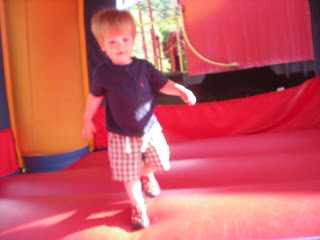 Hunter can't jump, he really tries. He only got to get in this thing because there were no big kids around to run him over!

I need to update our vocabulary list. Hunter is now saying 'ball' and I think we have heard him say 'papa' once or twice!
I can't speak for the rest of the country, but have we had some rain or what! When we first moved to Abingdon last summer the lake (Lake Holston) was reaching some record low levels due to a couple of years of below average rainfall. Picture a private boat dock with about 20 slips. Last fall you could walk out to the end of the dock and jump off the end...into the dirt and then just step over the 'lake'. Now, with our everyday rain showers the lake has filled back up and all the boat slips are safely back in the water. All the rain has been great for my garden, which is coming up beautifully, with the exception of some onions that I personally blame on the soil being really bad in that section! Everying else looks good and I will let all know when I have my first harvest. Hunter and I have a great time checking on it and talking about the different types of plants that are growing.
We had our first expericence of 'Trail Days' in Damascus. It was really fun. Once a year there is a big festival in the little town of Damascus. It is full of vendors supporting the Appalachain Trail and Creeper Trail. You could find just about any type of hiking gear you could possibly need for a long hike. For those unfamiliar, there is a part of the Appalachain Trail that runs right down main street of Damascus. So many people that are in the process of hiking the trail plan their trip around the Trail Days festival. Hunter enjoyed watching all the dogs, eating ice cream and jumping in one of those bouncy things.
We also had a fun Memorial Day with Aunt Jenny and Chloe. We all went to Plumb Alley Day in Abingdon, where they enjoyed watching a parade of bagpipers, eating ice cream and having their picture made with 'Miss Mountain States' (at least I think that was what she was, she had on a tierra and Chloe just thought she was a princess). Hunter and Chloe also got to take their first boat ride. Chloe was a bit apprehensive about getting on the boat, but once she saw it she jumped right on and didn't want to get off. In fact, she jumped right in the tube being pulled behind the boat! She loved it and spent the whole ride waving and laughing at anybody that looked her way. Hunter, didn't get to ride because Mom didn't wear her suit and I wasn't going to get soaken wet! We will have to try that again another day!
Lastly, Hunter has sort of out grown his little 4 wheeler that he rides all the time. You wouldn't believe how well he can steer that thing. He has no problem taking it all the way around the house and can even pull it into the garage between the cars. He has quite the driving skills for his young age. So we have taken a step up and he now has a Ford 150. It is the cutest little truck, but it goes a little too fast. I wish it had 2 speeds on it so he could get used to going a little slower while he is still just a little guy. The speed doesn't scare him and he can drive it like a champion! It has a steering wheel unlike his 4 wheeler, but he learned very quickly how to drive it around the yard.

and.....he has finally learned how to peddle his tricycle!! He has waited his whole life for this moment and one day he just did it! He likes to watch his feet go around and around, which interferes with his steering, but he is getting the hang of it. David and I can't wait unitl we can trailer him with us for a bike ride on the Creeper Trail!

Wish this was just a little longer, but I ran out of memory on my camera!
Posted by Jaime at 4:49 PM No comments:

Hip, Hip, Hooray!!! Hunter is FINALLY starting to say more words. It is so fun listening to him talk and try out new words and sounds. Here is an updated list of his vocabulary in order said.

2. He laughs when he means "yes" It was so funny, David came up to me the other day and said, "I have figured out when he means yes." I laughed and said, "what have you come up with?" David replied, "he does this little he-he kind of laugh." It is the funniest little thing. So if you ask him a yes or no question he will respond by either shaking his head 'no' or he will give you this funny little laugh for 'yes'. We are going to have to try and get this on film.

3. He turns to the side and shakes his hand for you to "come on". Sometimes I think he says "moan, moan", but he is a quite little guys so most of the time we get the hand shake and side turn. It has been effective for him.

4. And everyone knows he will drag you around by the finger to any place he wants to go. This too has been very effective and very sweet.

So there you have it in a nutshell, our latest communication endeavors.
Posted by Jaime at 5:47 PM No comments: