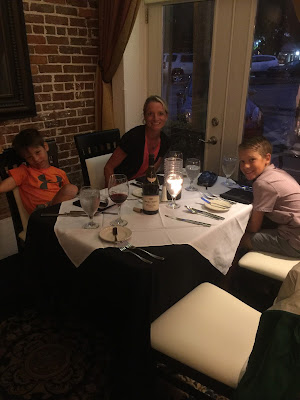 David and I were out done.  Don't get me wrong, we have had an amazing time with the boys but we needed a little break from all the bells and whistles of Legoland and the hotel.  David found this quaint and super fancy (we didn't know that at the time) restaurant few miles from the hotel.  We made reservations and headed out the door.  It was late when we got there.  I think it was around 7 and I knew the boys were going to be hungry and I had my doubts on how long good behavior would last after a really long exhausting day.  Turns out, this was one of the most memorable dinners we have ever had as a family. 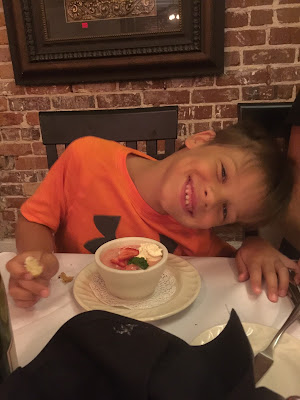 First, our waiter and hostess were fantastic.  They didn't snub our under armor wardrobe and understood the a day of Legoland and the hotel can leave parents feeling somewhat addled.  We were the only family in the place and there was a pianist playing on a grand piano by the front entrance.  The kids new right off the bat this was a super nice place to eat.  It was four course dining and took over 3 hours to eat and we enjoyed every minute!  The first course was the soup or salad.  The waiter treated the boys like they were adults and helped them decide on the soup over the salad.  He really went out of his way to make the boys feel like superstars. 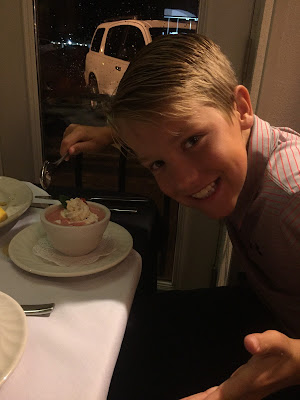 The soup was a strawberry gazpacho and it was delicious.  It tasted more like a dessert and the boys gobbled it up.  The soup and salad was followed by homemade Italian bread with oil and vinegar. 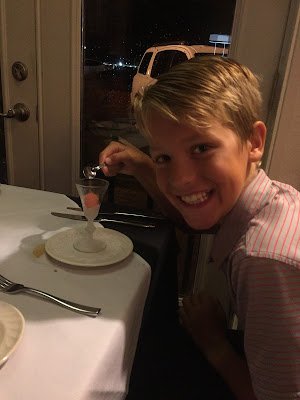 Before the main meal was served our super friendly waiter brought us each a palate cleanser.  This was a nice treat for the boys. 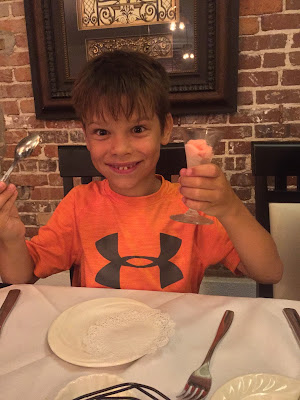 Lucas loved his and thought it was dessert.  It was a watermelon sorbet.

I don't have any more pictures of this evening but it is worth sharing the story even without them.  This was an Italian restaurant and all the pastas were handmade and delicious.  The boys both had spaghetti and meatballs and David and I both had fish.  For dessert we had a bowl of delicious hot and yummy chocolate that simply melted in your mouth.  While we were waiting on our entrees the pianist came over to visit with us.  He had the best personality and was so engaging with the boys. (in a non irritating way.)  He asked us to write down 2 songs we wanted him to play, said he could play or sing anything they wanted.  They chose Star Wars and Uptown Funk and David chose Carolina on my Mind.  He played them all while we were eating.  When we were done he came back over to the table and talked for us awhile about living in Fl.  He also showed the boys a cool magic trick with their water glasses and straws.  By the time we left the place it was after 10.  We were tired but it was a fine meal, appreciated by all. The boys still talk about that place.
Posted by Jaime at 12:09 PM