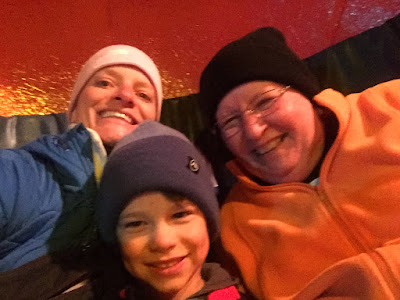 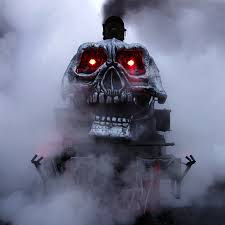 This was our coldest camping trip yet!  I think it was the coldest weekend of the year.  The highs were in the 40's but the wind made it feel much colder and the lows were in the 30's!  Burr!!  We camped at Linville Falls State Park and their was NO electric or water hook-ups.  No worries, the R-Pod rocked another great camping trip and we stayed warm as toast in our little camper. The above picture was taken from inside the tilt a whirl at Tweetsie.  We took the boys to ride the Ghost Train!  It was a whole other side to Tweetsie we had never seen before.  It was lots of funny and just scary enough for the boys.  The train took on a whole other look and the ride was all about catching these wolf like creatures that were loose in the woods.  The boys loved it!  Although, one little side note here, when Lucas was walking toward the park entrance he saw the train, took his hat off and threw it to the ground while saying, "I am NOT riding on that!" In the end, he loved it. 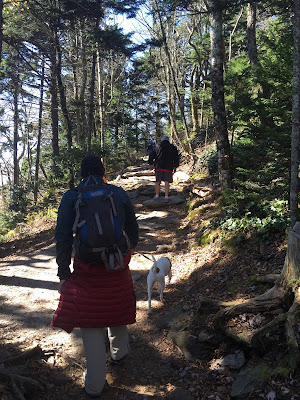 Hiking up to the falls.  Only Kona made this trip.  Ibis wasn't doing well and wouldn't have been able to hike and it was too cold to leave him in the camper.  He was boarded for the weekend. 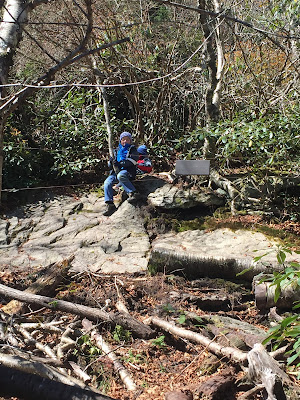 This pictures are out of order but that's Okay.  We went to Linville falls and Tweetsie and the first day and on the last day we went to Grandfather Mountain and somewhere in between we managed to squeeze in some gem mining.  These two pictures were on the hike up to Grandfather Mountain and the Mile High Swinging Bridge.  It was FREEZING!!  The temperature was around 28 degrees with wind gusts up to 30 miles per hour.  By the time we were on the bridge you couldn't see anything but the whites of our eyes. 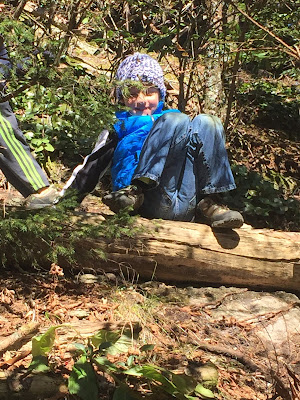 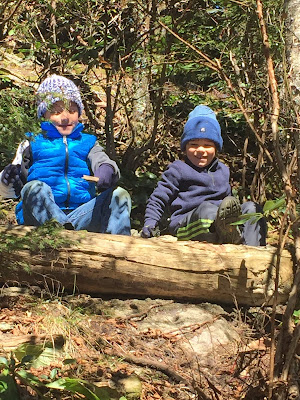 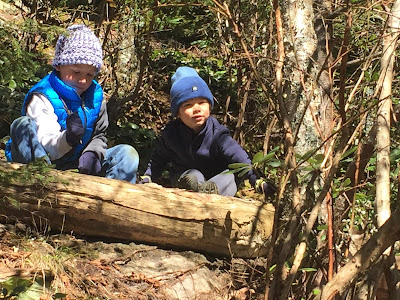 When I posted these pictures I had to do a double take and make sure I had the right pictures and the right year! Lucas looks just like he did when he was a baby in some similar photos we have of him.  He is 5 years old here, but he still has that sweet little baby face and chubby cheeks to boot. 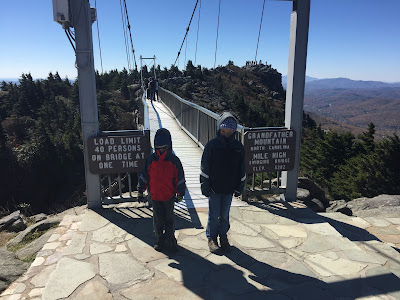 The boys made it to the top.  You can drive to the top or you can park in a below walk and take the milesh or so hike to the bridge.  It is a strenuous hike as well.  Very steep and rocky with several switch backs. 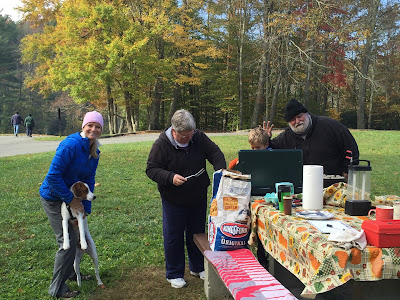 Nana and Uncle Larry arrived at the campground a day or so ahead of us.  It was nice to camp with them again and this time show them our R-Pod.  They have been camping for over 30 years, have lots of experience and plenty to teach us.  Nana makes some delicious meals with the dutch oven and the boys love Uncle Larry's biscuits in the morning. 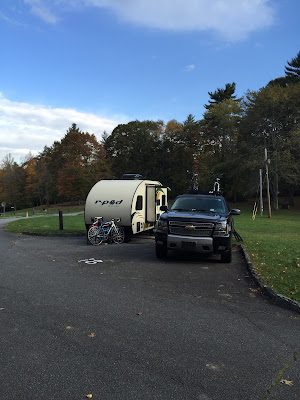 Our home for the weekend.  The camper did great in the cold and we stayed snug as a bug...well, except Hunter.  He had the window by his head and complained of being cold some through the night.  We had some solar panels that we were using to help keep our battery charged but we didn't use the heat like we really could have.  By the end of the weekend and our power levels still nearly fully charged, we could have warmed it up a bit more inside.  Lesson learned! 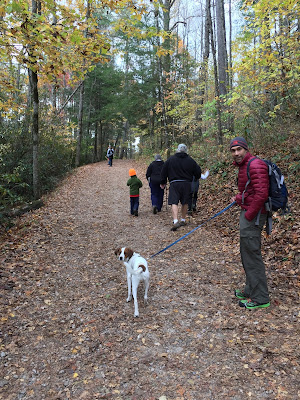 Now we are back at Linville and hiking to the falls.  It was so busy this weekend.  The State Park parking log was full!  It was peak leaf changing season and people had traveled from all over to see how beautiful the Blue Ridge Parkway can be in the fall.  We even ran into the Rhem family from Sullins! 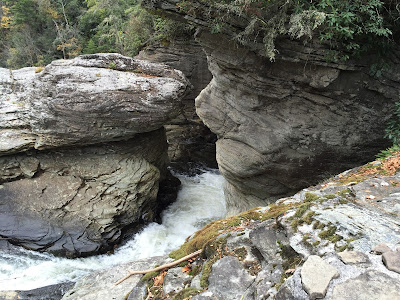 The power of the water rushing through the falls is breathtaking. 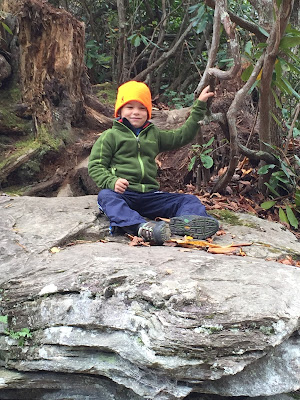 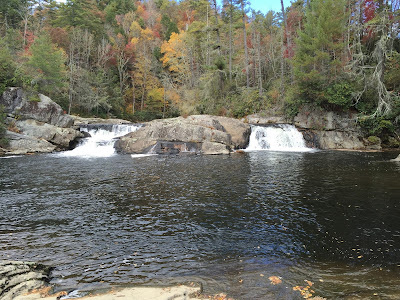 Some views from the lower falls.  This park is simply amazing and a must see if you haven't been before. 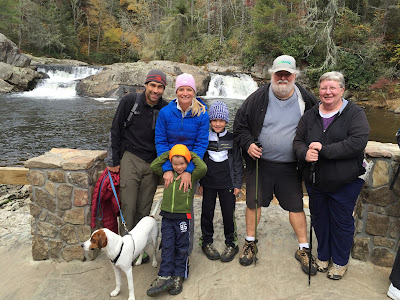 A really nice lady offered to take our picture.  Despite Uncle Larry in his shorts, it was so COLD this weekend. 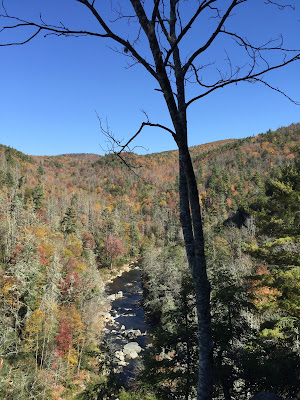 Some beautiful views up the river gorge. 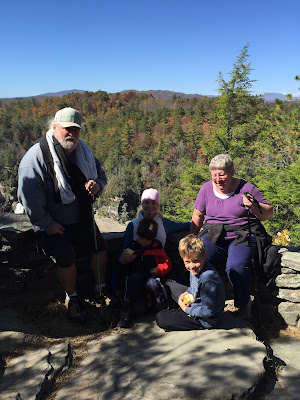 This was at one of the hike summits.  You could look down and see the lower falls from up here. 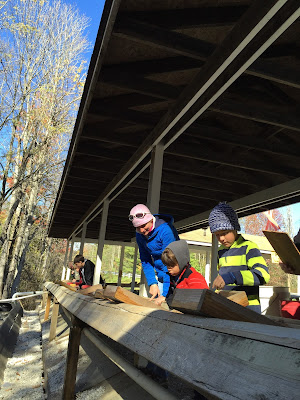 Gem mining at it's best.  Apparently, this area is known for its gems.  We asked one of the park rangers where the best places to go was around town and they sent us here....and I can't remember the name!  The boys have been begging to go for about a year so we caved and went on this freezing fall weekend.  We had a 20 pound bucket and nothing but time to find us some jewels. 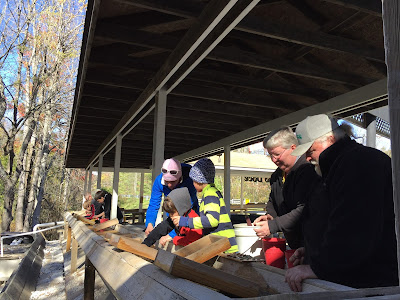 The boys thought this was the greatest thing ever!  Like a treasure hunt and they were excited about every colorful rock they found.  Lucas really like the tiny ones. 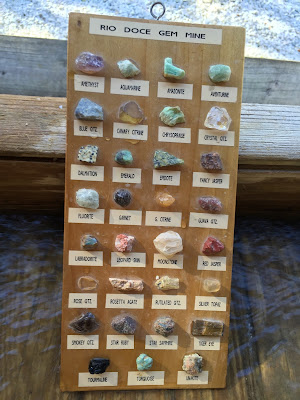 Here was a list of all the raw gems you could find and what they look like.  I think the boys thought we would pull out polished and shiny gems.  The owners of the store could polish your gems and turn them into some fine jewelry but it took several weeks to do this.  Thankfully, the boys were happy with their bag of extra special rocks and weren't interested in leaving them behind or having a necklace! 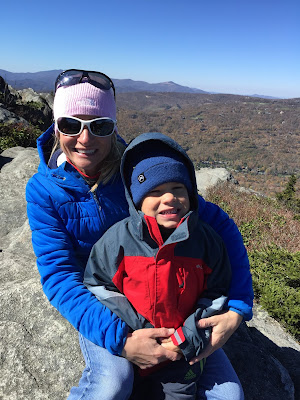 Lucas and I on the other side of the Mile High Bridge.  I have to admit, I was a little nervous way up there and I din't like the boys walking around at all!  There are no safety nets, no guardrails, but plenty of steep edges and dangerous drop offs! 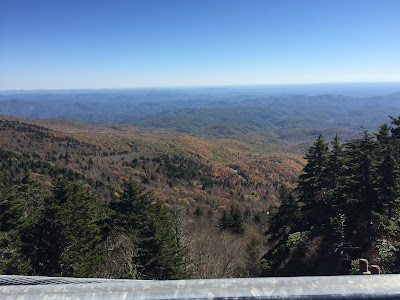 View from the middle of the bridge.  The visibility was incredible.  It was cold but and extremely clear day. 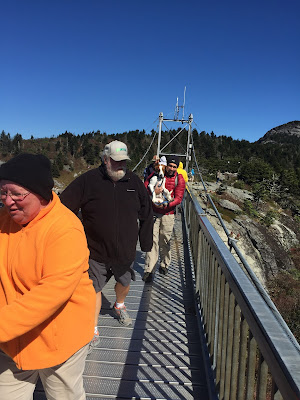 Walking back across.  Yes, Kona make this hike as well.  Poor thing was scared to death of the bridge and David had to carry him across and then back again!  Another successful camping adventure for sure!
Posted by Jaime at 2:46 PM