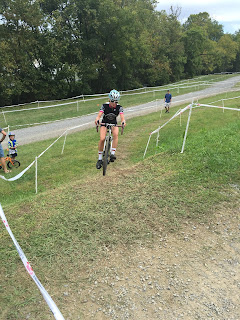 The Simmons are shaking up the racing scene in cyclocross this year.  It was suggested by my coach to try some cyclocross races this fall to sharpen my cycling skills and power on the bike. I was nervous about this kind of racing but after my first race, I was hooked!  We loved it!  I compare it to cross country running versus road running. 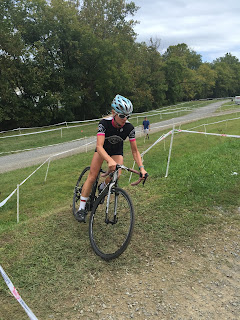 Coming up the loop de loop as I called it!  I was really nervous with some of the hills and drops but after the first couple of laps they became easier and easier.  The way these races are set up is way different than any race I have ever done.  I'm used to racing for a finish line.  This race is based upon time.  I had 30 minutes to get in as many laps as I could.  I was racing at a cat 4 level.  This is a beginner level and right where I needed to be.  I had the fitness to do well but lacked the handling skills on the bike.  The lower the cat level the longer you raced and the better your skill level. 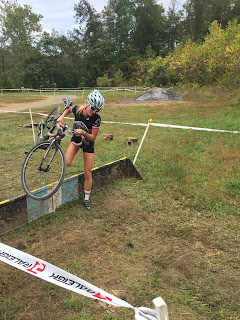 One of the barriers we had to cross.  I still need work in this area but by the second lap I had this course figured out and was able to pick off the girls ahead of me one by one until I was number one across the finish line!  Snagging a first place finish in my very first race was awesome! I was totally ready to do some more. 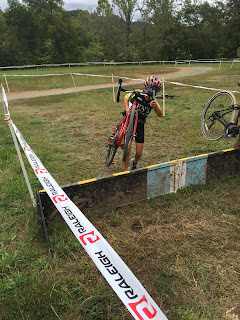 Look at Hunter go!  He did the exact same race as me and for the entire 30 minutes.  I was so worried about him out there but he did a great job.  He was the youngest of the bunch but he did it!  No spills and he worked his butt off.  I think he is hooked as well and we are so fortunate to live in an area that offers cyclocross racing.  It's a bonus that the sport if fairly laid back and incorporates activities for the entire family to participate.  What a great way to get kids excited about racing and riding a bike. 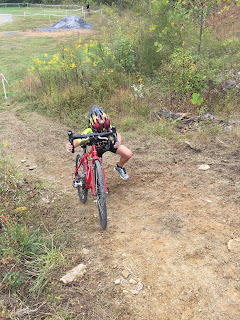 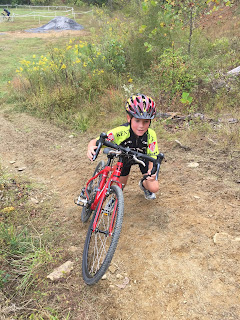 Pushing to the top of the hill before mounting for the downhill.  Look at that smile.  Always so proud of his efforts! 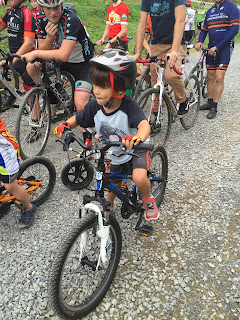 Even Lucas was in on the action.  These smaller guys had a point to point race of about 1/2 mile.  No problem for Lucas.  He took off and finished first!  He was so happy and was upset when he couldn't do more.  Next year little guy! 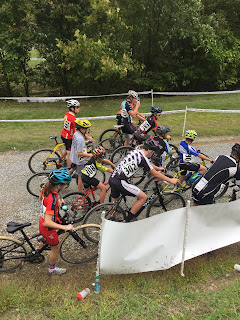 Hunter lined up with the teenagers at the start.  Be still my heart.  Hunter is one tough and brave kid!