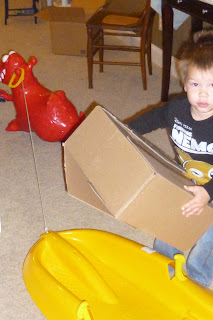 The boys were so excited for Christmas this year.  It was unlike any other Christmas, there were days when I didn't know if I was going to last all the way to Christmas.  One day Hunter decided he wanted to be Santa so he and Lucas came up with a really fun game of elves, toy making, present delivering and Santa.  I loved it! (for the first week anyway, it was the 6 weeks of playing Santa afterwards that just about put me in the looney bin).  So this is how it worked.  Hunter was usually Santa so we had to tell him what we wanted for Christmas.  He would pretend to write everything down.  Lucas was the elf and he would gather the toys and put them on the sleigh.  I was usually the kid sleeping waiting for the presents to be delivered.  I gave them old boxes and gift bags and they delivered presents and played Santa up until Christmas Eve. 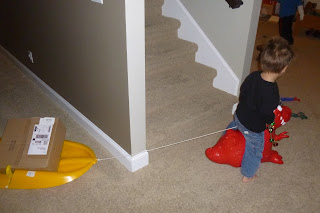 Here is Lucas riding the reindeer and pulling the sleigh full of presents. 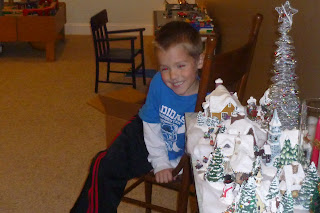 Cutest little Santa in the world. 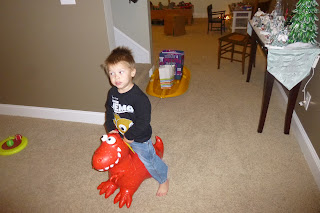 Mr.  Elf with another delivery.