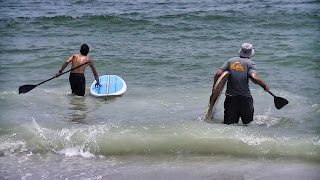 I wish I had more pictures than just these two. I spent more time videoing the experience than taking pictures.  These boys worked and worked on getting up on the boards.  It was a really difficult day to paddle board in the ocean (we later learned, I mean like 2 days later, that you were supposed to put the boards in the sound---really hard to do in the ocean) the waves were huge, sharks in the water and choppy waters past the breakers.  David eventually got up for a minute or two but I'm pretty sure Kevin didn't get up past his knees.  Staying on your knees was the best way to stay on the board and in control, especially in the choppy water.  We had several folks to gather on the beach to watch them attempt to paddle board! 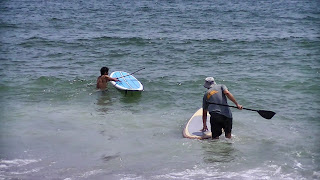 Noelle and I gave it a shot the next day.  The conditions were much better but it was still really hard to do.  The boys had to help us get the boards out past the breakers.  The boards are HUGE and very heavy and I was afraid of the breakers sending the board right into me!  Once out past the breakers I was able to pop right up.  I was so scared and my legs wouldn't stop shaking.  I was scared of being that far out in the ocean and there were dolphins swimming right within an arm's reach of my board.  I wasn't afraid of the dolphins but I was afraid they might knock me off the board and into the water with the sharks.  I mean we saw a 4 foot shark in less than a foot of water so I could only imagine how big they were a half a mile off shore!  When I finally calmed down the experience was great.  I would do it again but I agree with the locals, it would be more fun in the sound.
Posted by Jaime at 8:12 PM