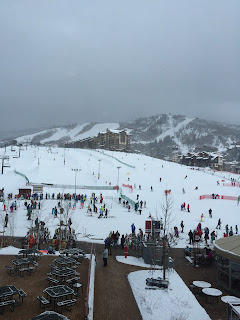 When we got to the hotel we had a little bit of waiting to do as they got our rooms all ready.  It was so much fun to see the skiers everywhere.  Everyone was having such a great time.  The atmosphere reminds me of big races.  Everyone is happy, everyone loves the outdoors and everyone loves a nice drink when the day of hard work is done!  We hadn't been up on skis yet, but all day of traveling equals a day of hard work! 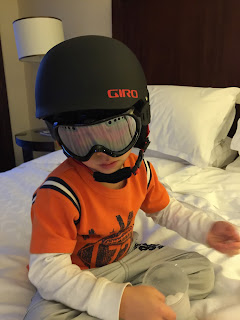 Finally in the room and ready to gear up.  We all purchased skiing helmets at the lodge.  Turns out if we rented them at the end of the week could have just bought one!  Nice to know only your sweaty head had been tucked in there all day!  David and I gave the boys ski googles for Christmas.  When you are four it's cool to sit around in the room wearing your new stuff. 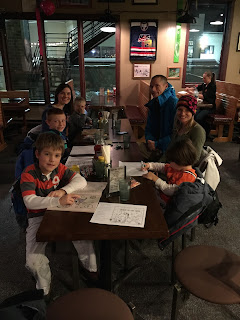 Dinner out the first night in town!  Great little hamburger joint right in the ski village. 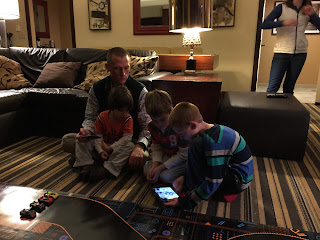 Big Daddy, aka Brian Dawson, had Anki Drive flown in to the hotel room so the boys could car race during down time.  It was very thoughtful of him to provide the extra entertainment for the kids....I think the daddies also raced a time or two! 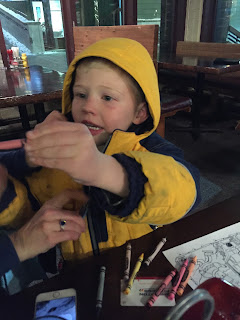 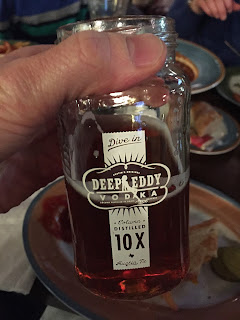 I don't remember this picture but it looks like these were the mugs we were drinking out of at the restaurant that first night in town.  David must have found this humorous and snagged a picure. 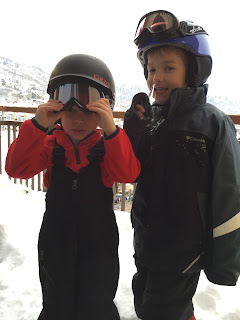 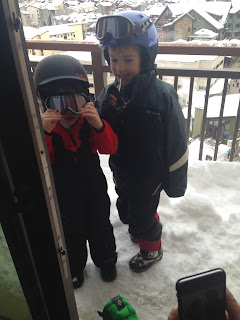 Still waiting to go skiing.  As you can see the balcony was covered in snow.  There was at least 18-20 inches of standing snow.  Steamboat had a big snow the previous week, but by the time we were ready to fly home all the snow out there had melted.  We had a couple of days of snow and it was beautiful to ski in.  For the most part is was warm (at least in the 30s) and sunny.  The warmer temps made the skiing more pleasurable for the kids. 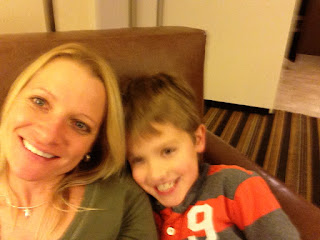 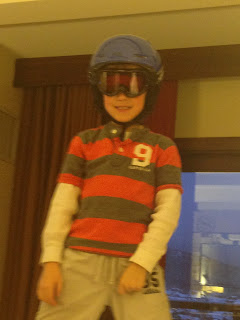 Play time in the room.  A great start to a wonderful week of skiing fun!  Love my family!
Posted by Jaime at 8:54 AM