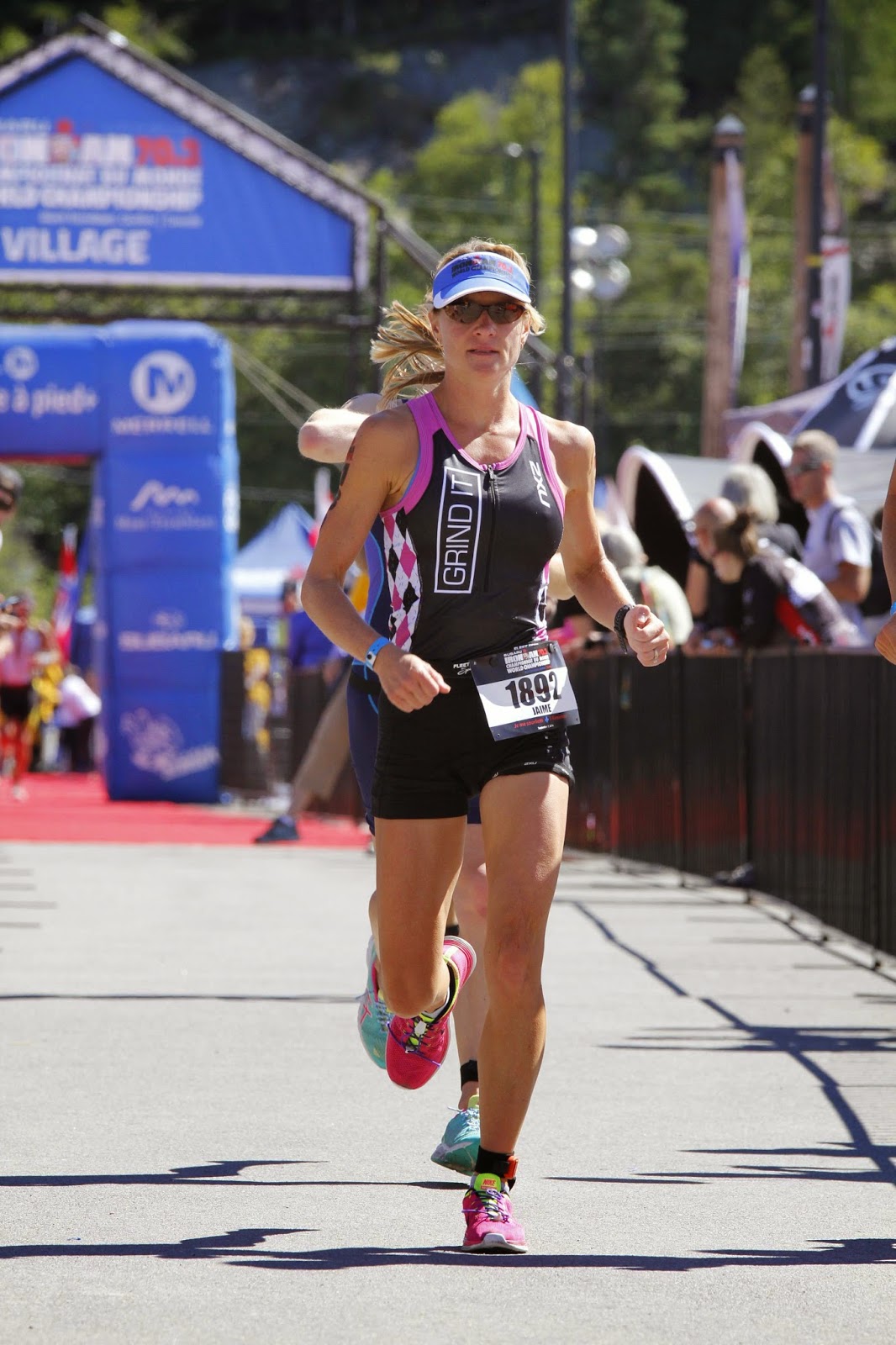 This post is not in any kind of order.   They have professional sport photographers along the course snapping pictures of everyone.  It is nice to have some good pictures of yourself during the race.  There is not way family could get out on the course and find you! 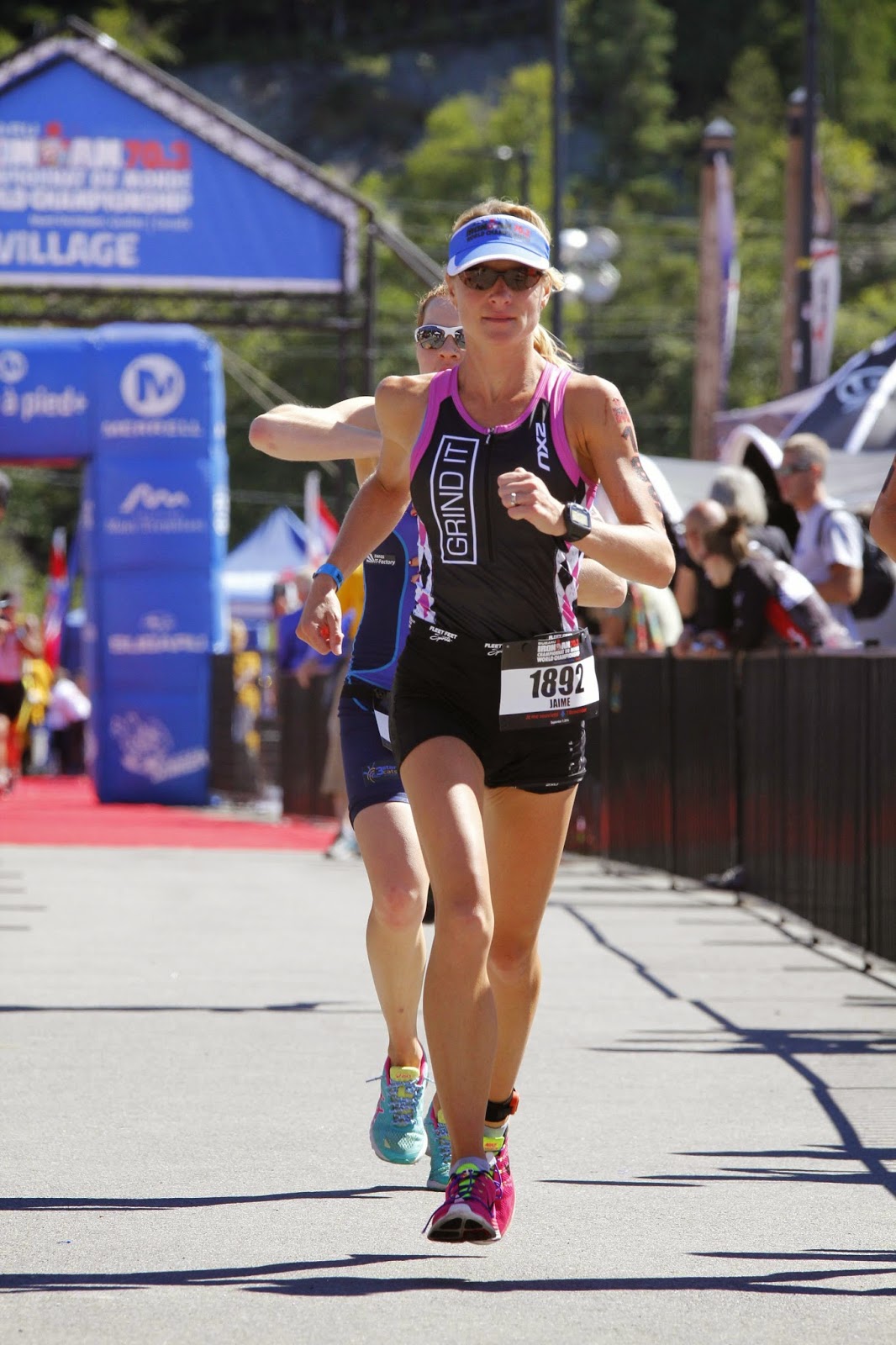 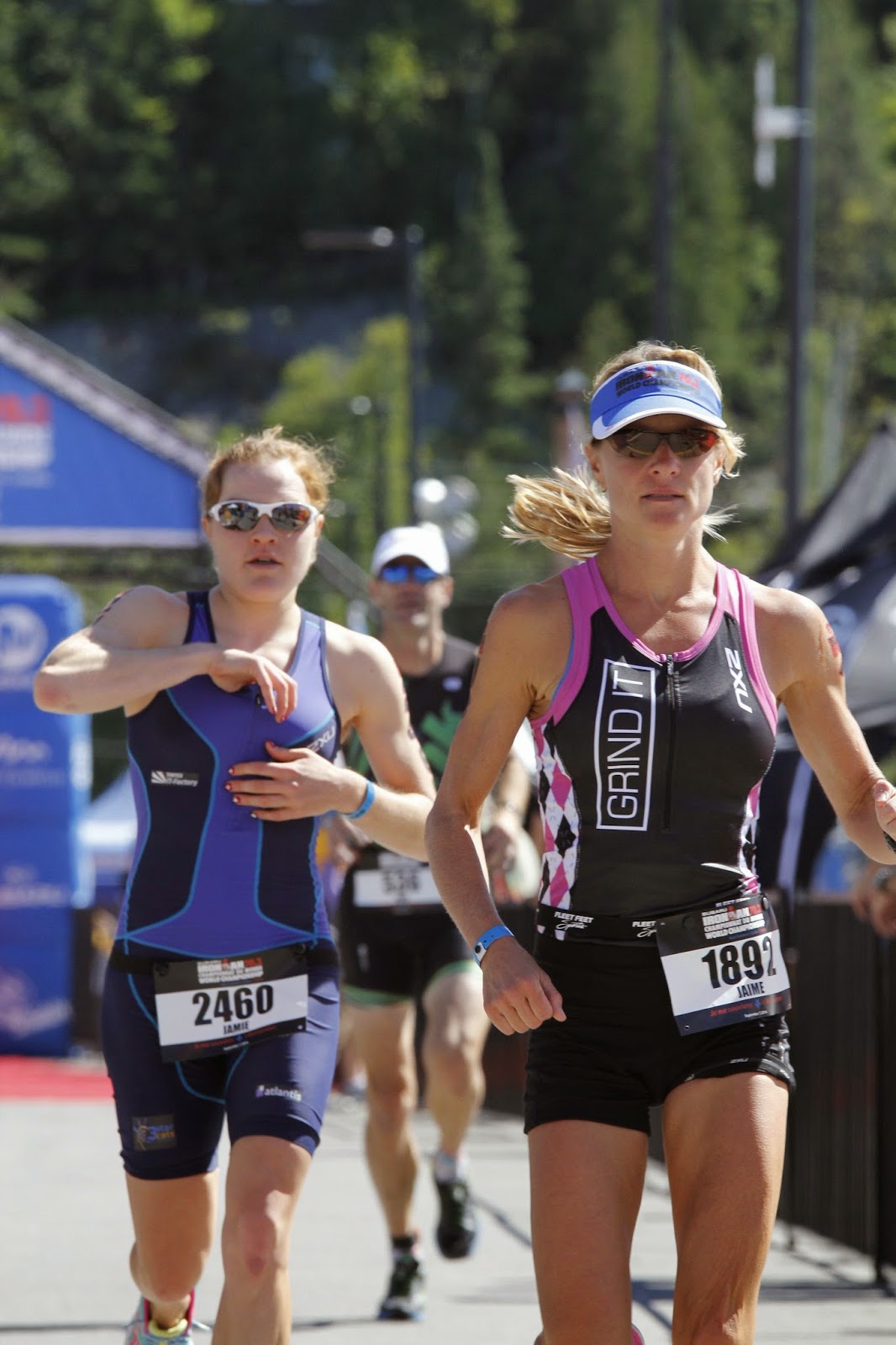 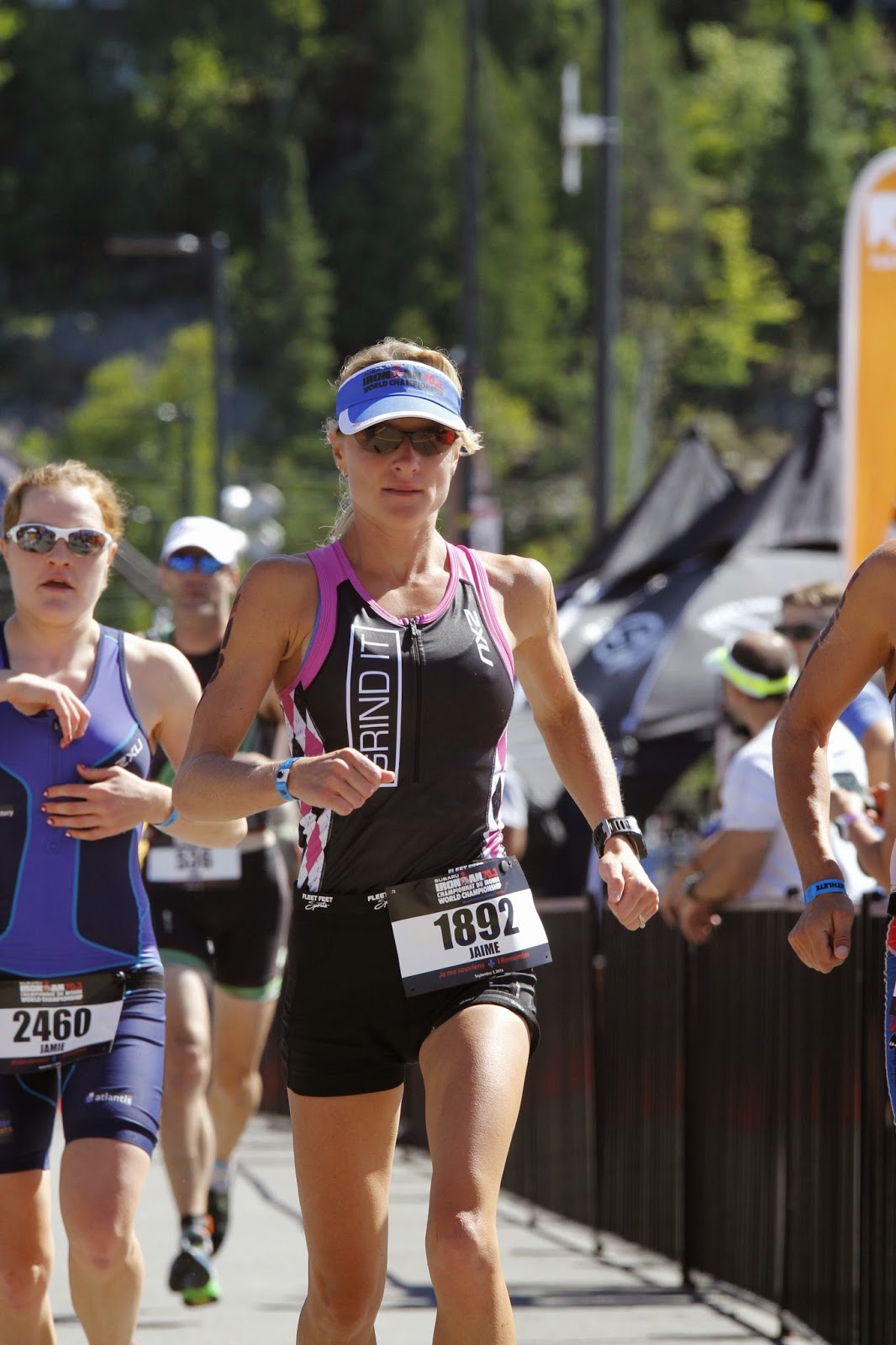 These first few running shots were taken out of T2.  I remember the day had warmed up nicely and it was actually getting a little hot.  My hands were sticky from the Huma gels I had on the bike and I was thinking about using some water at one of the stops to wash them off.  I think I managed to get them less sticky and less irritating to me after passing through water stop number one which was up the first of many rolling hills.  I felt really good off the bike the last 5 miles of the ride were really hilly and in some sections folks were dropping their chains and crashing right in front of you.  I tried to let people have plenty of room through this last difficult section. 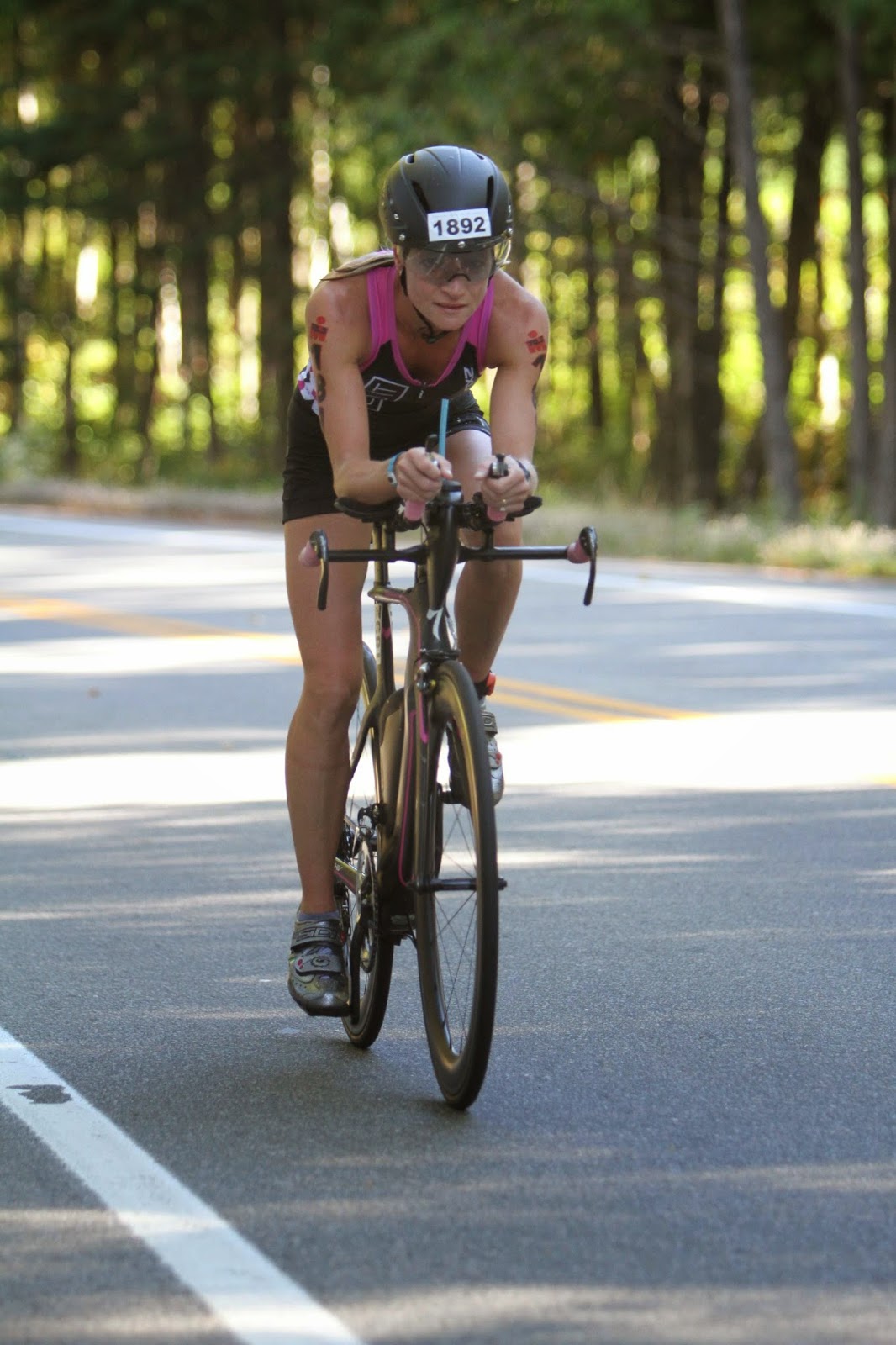 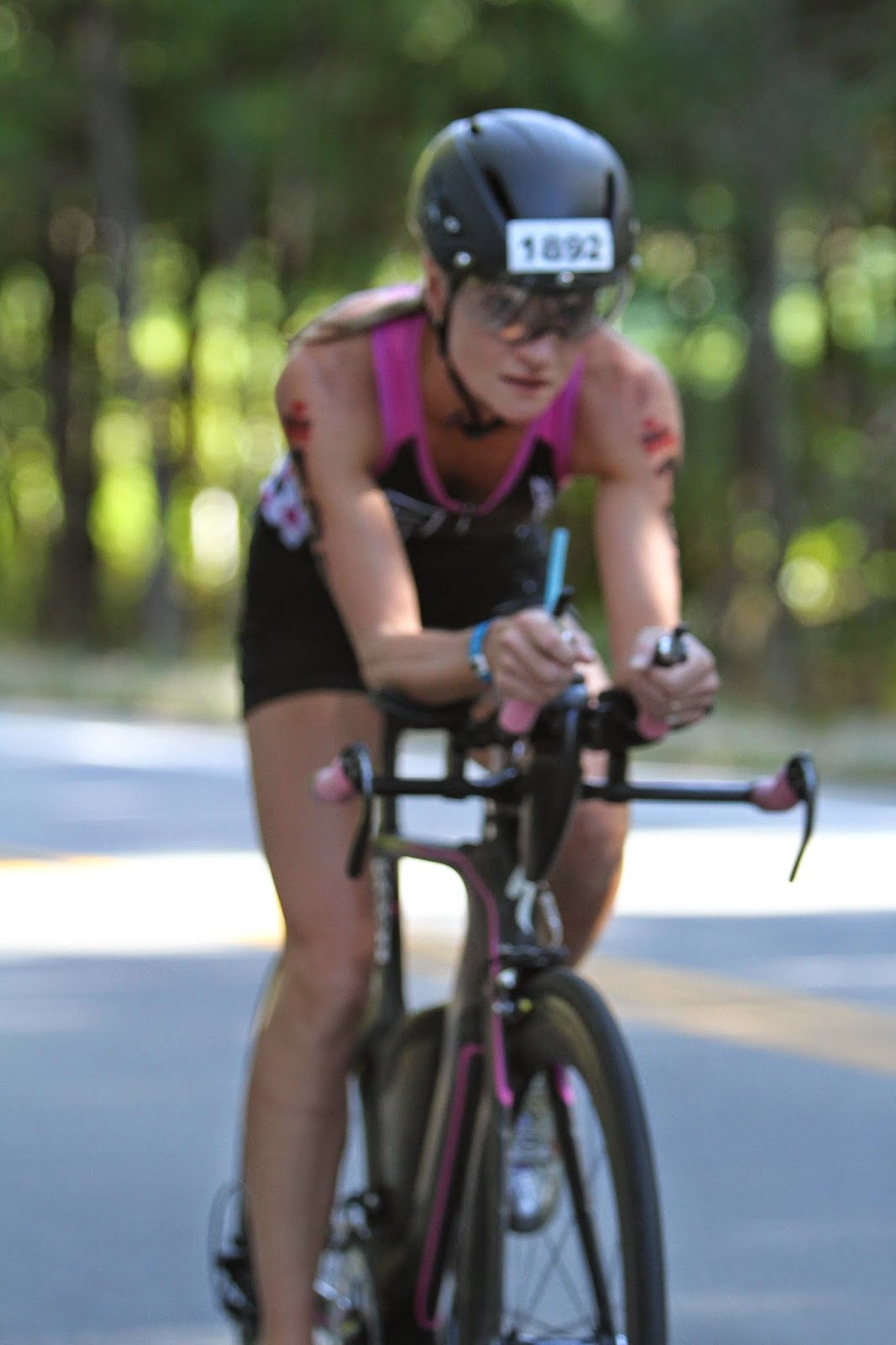 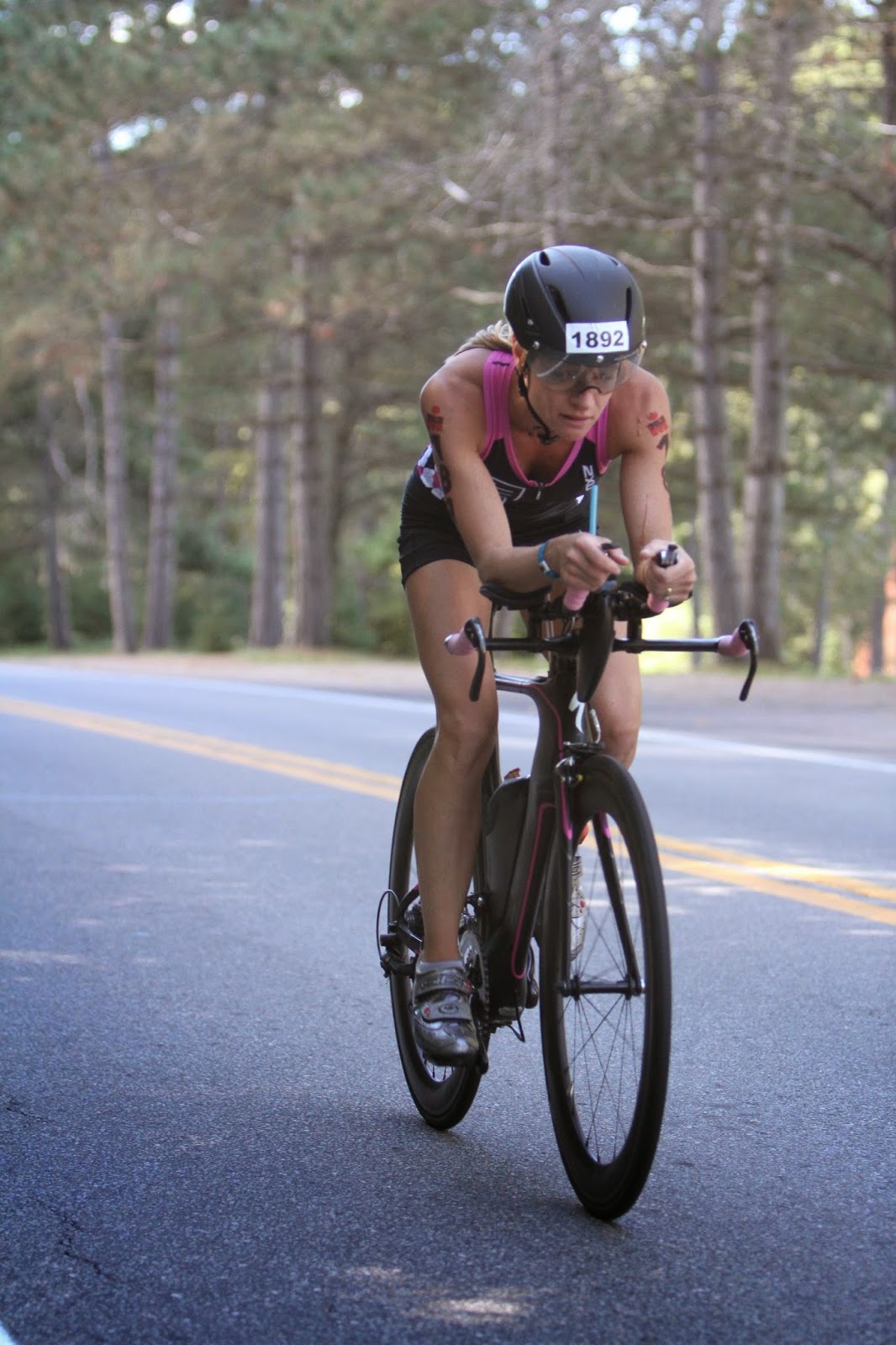 I could tell from these pictures that I was nearing the finish.  Most of the ride was out on the highway.  There were small mountains and some evergreen trees but there wasn't much to look at.  On the way back into Mont Tremblant we did go through the streets of a little town.  It was a crazy annoying 4 mile out and back but it was a great place for spectators and it felt good to see the streets lined with cheering crowds. 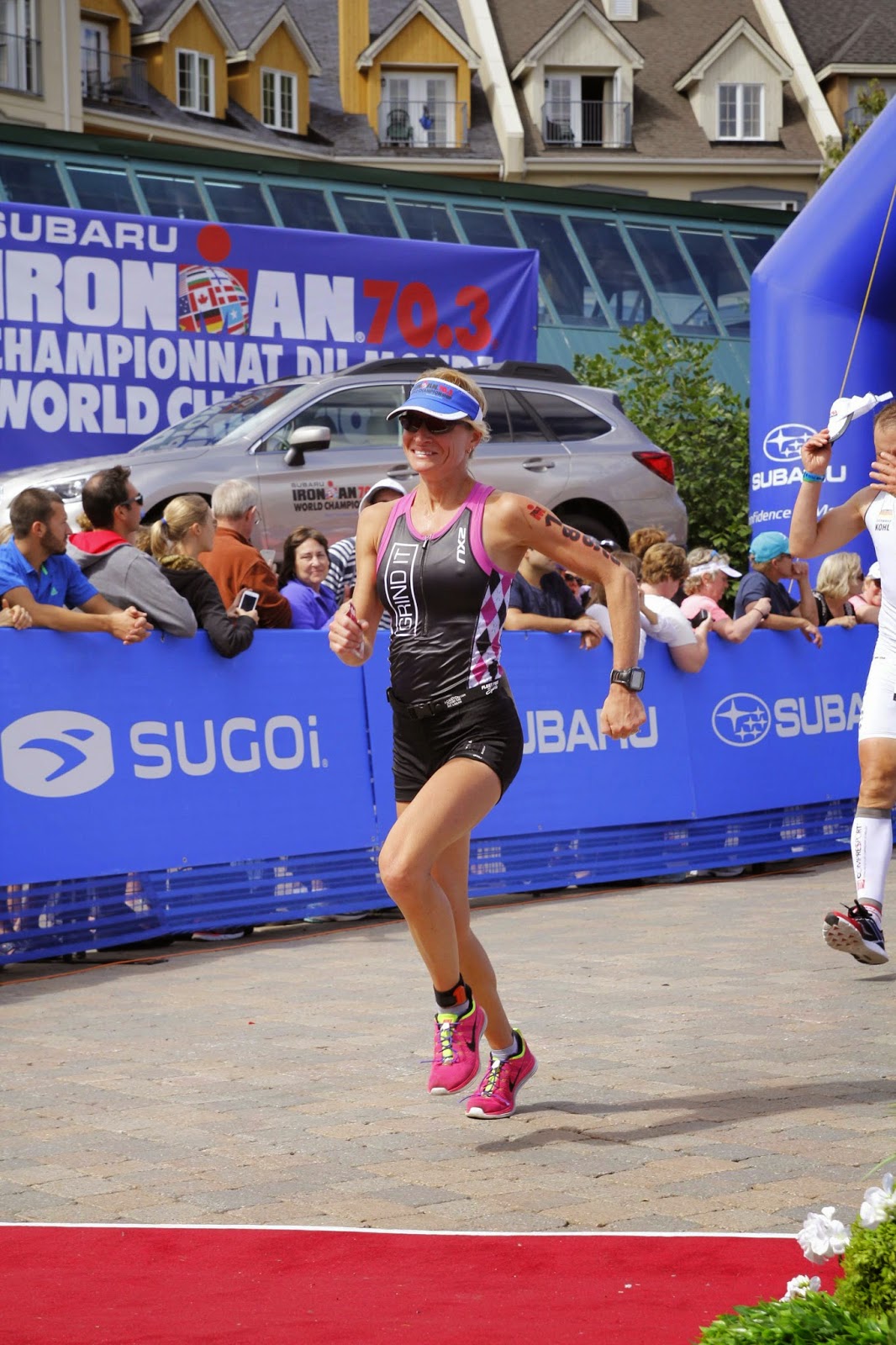 The homestretch.  It was hard to breathe as the emotions got the best of me.  I had waited my entire athletic life to run on that carpet and under that blue finish line balloon.  I did it, I was almost there and it was a wonderful, wonderful feeling. 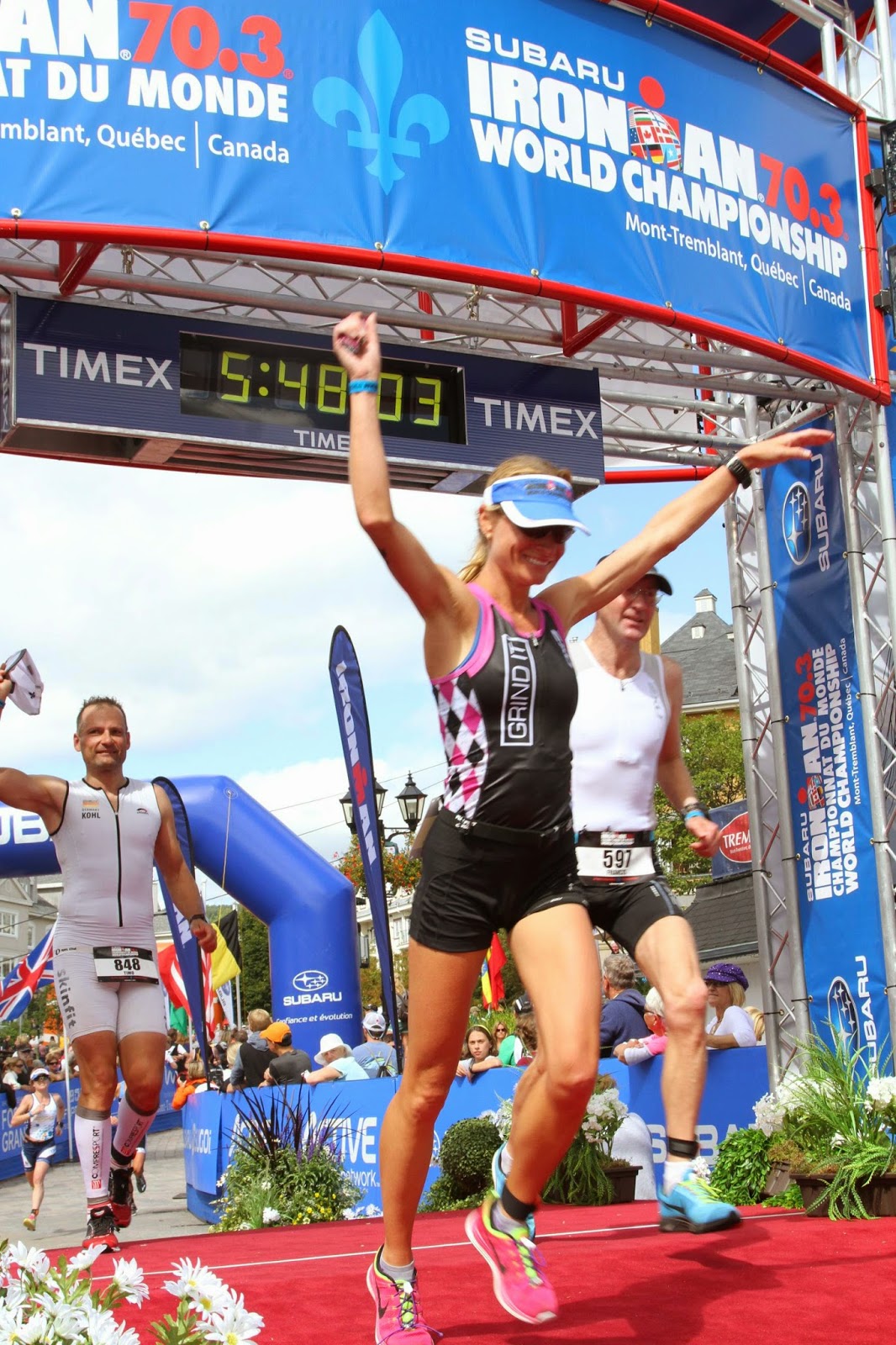 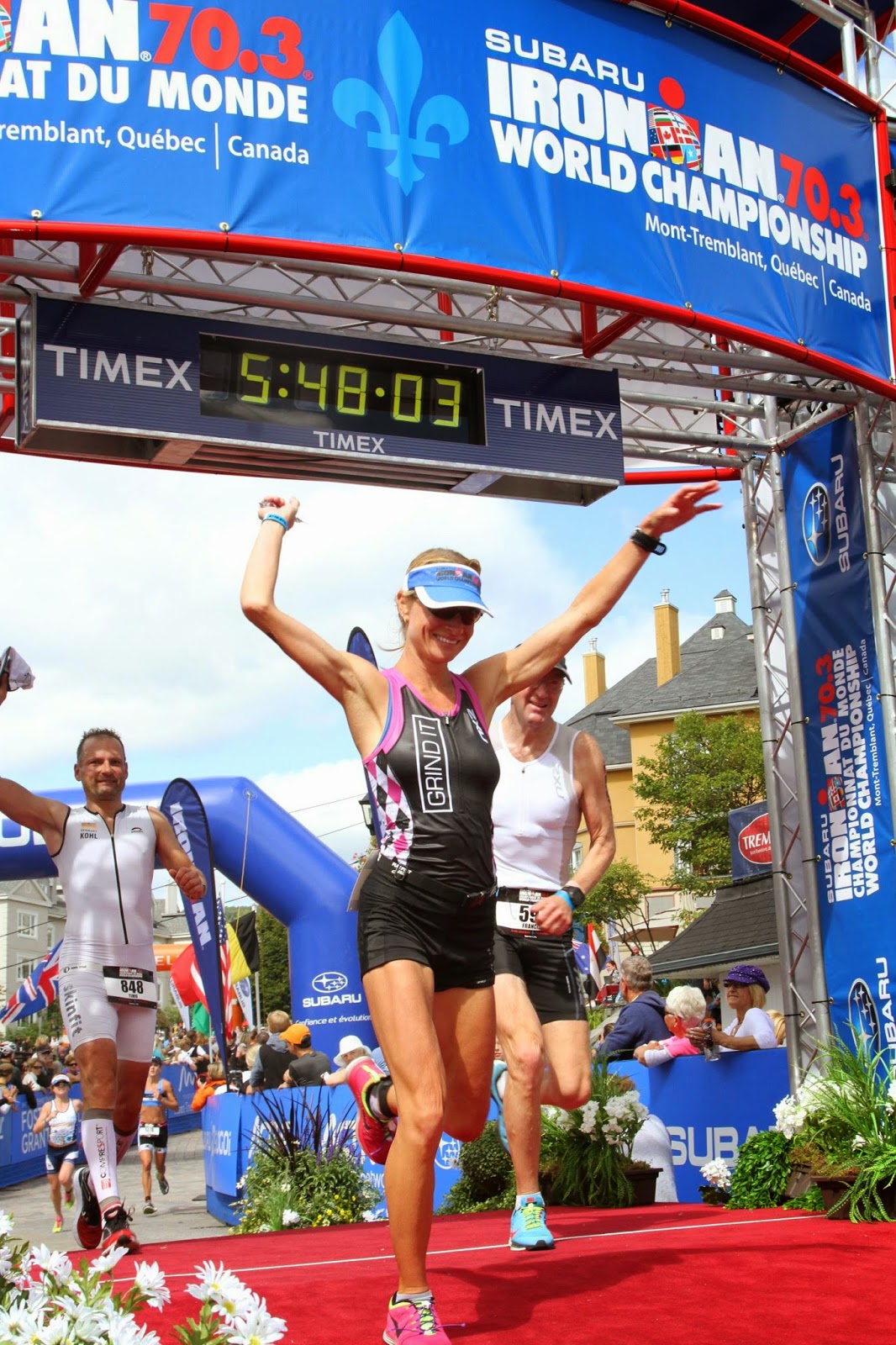 If I ever do this again I will take a minute and pause under the finish line.  There were lots of people finishing at the same time so I wanted to get out of the way.  Next time, I will relish this moment just a second longer and do something cool across the line, like maybe a cartwheel!  A personal record for me.  I had no regrets! 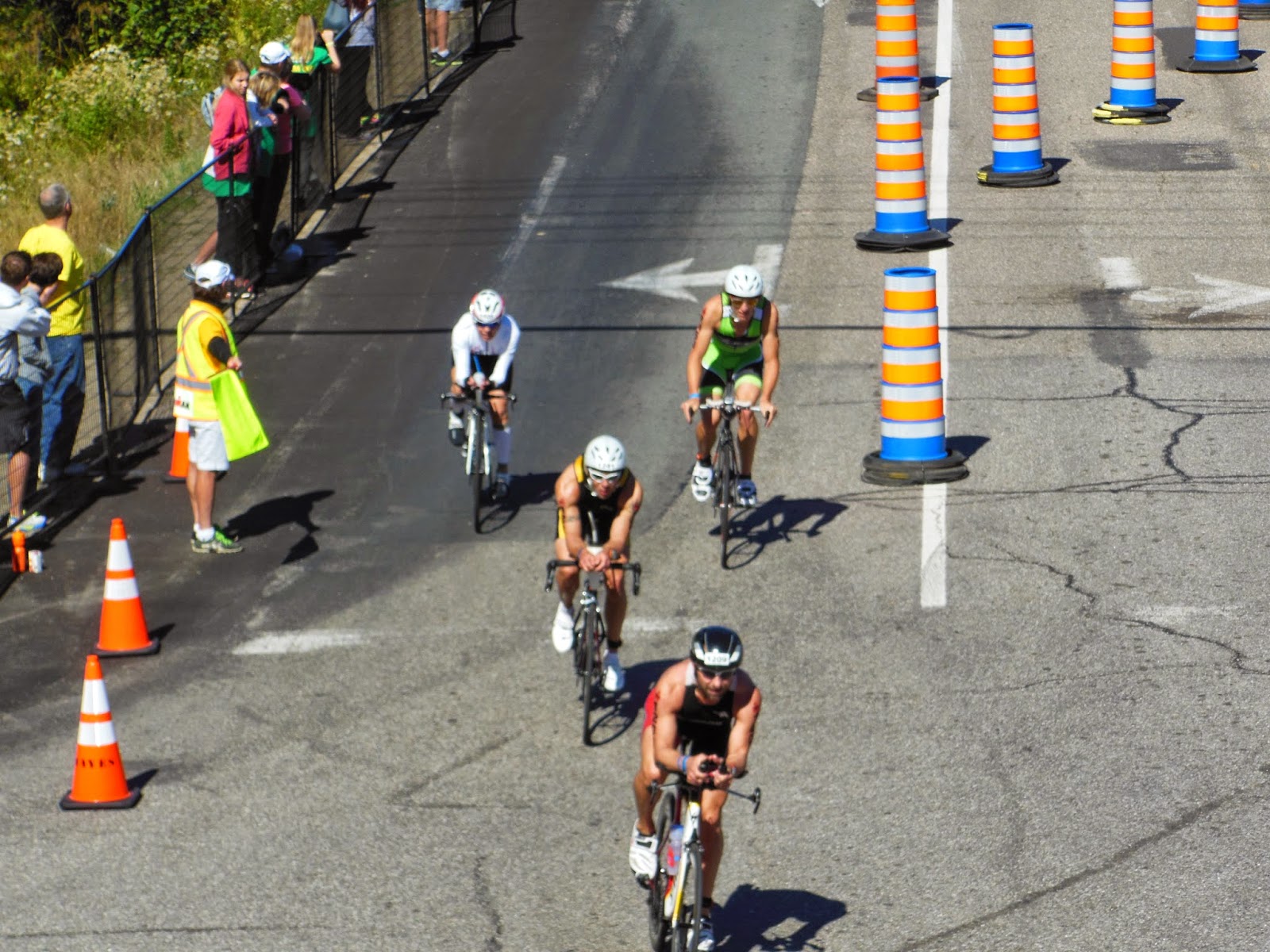 Mom and dad snapped this pic from up on one of the pedestrian bridges.  This was a  dangerous curve and I think there were a couple of wipe outs. 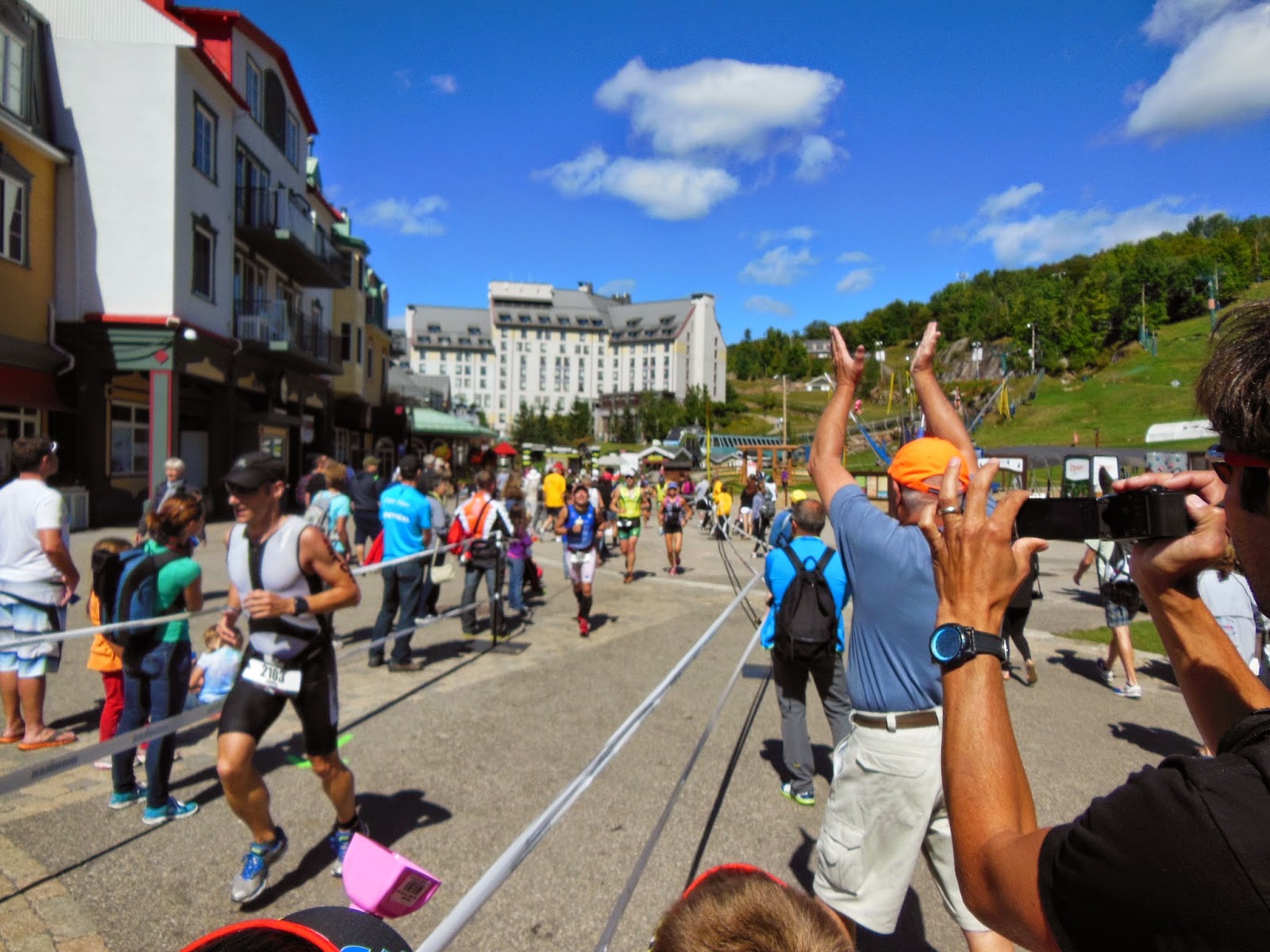 Just finishing up loop number one of the run.  Loops are both good and bad.  It's nice to know what you are getting into the second time around but.....you come within feet of the finish line and still know you have half of the race to finish! 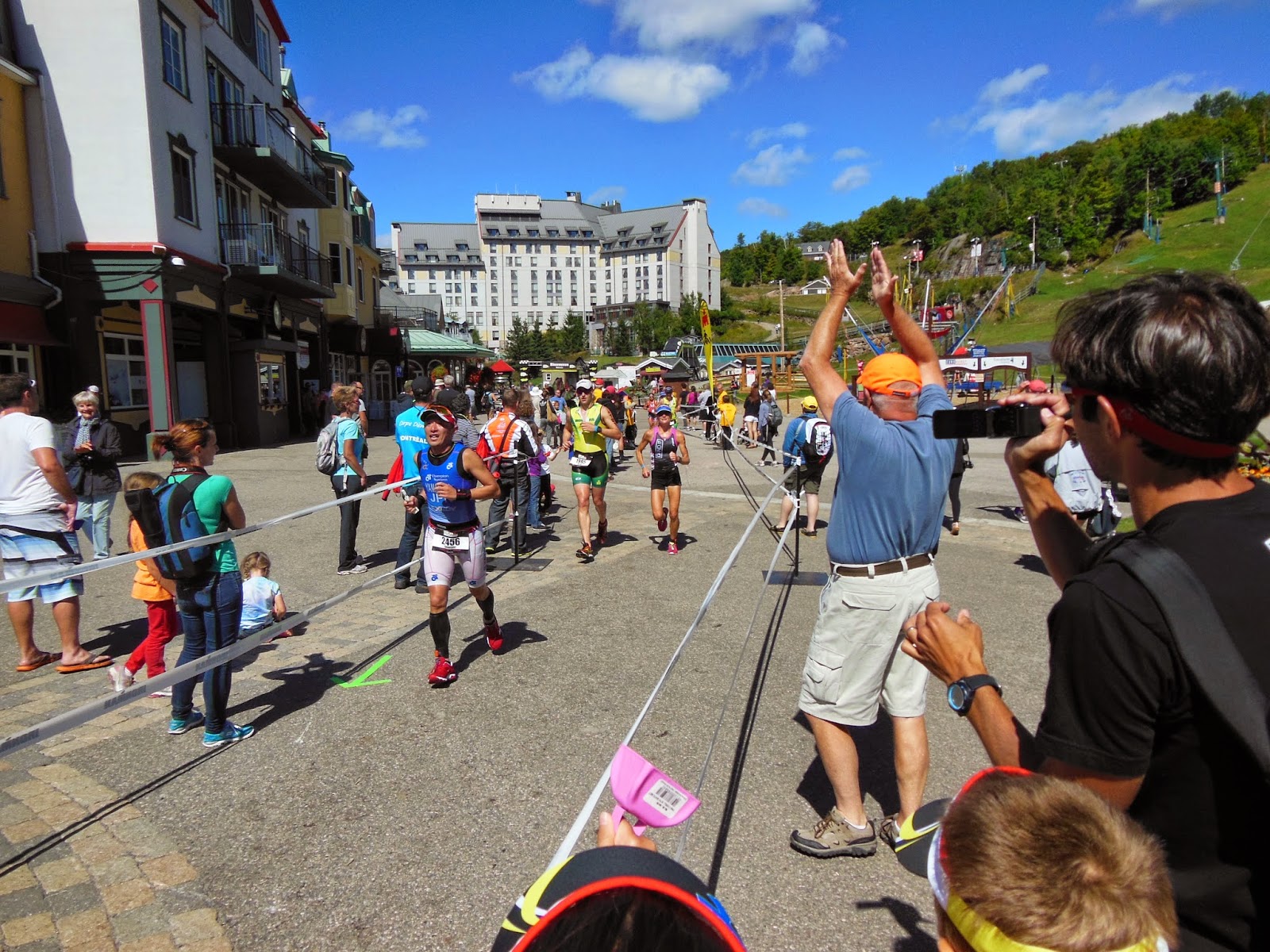 The best cheering squad a girl could have.  I will admit, I was hurting and not much into the smiling and waving but I tried!  Coming up the cobblestone streets in the resort was brutal. 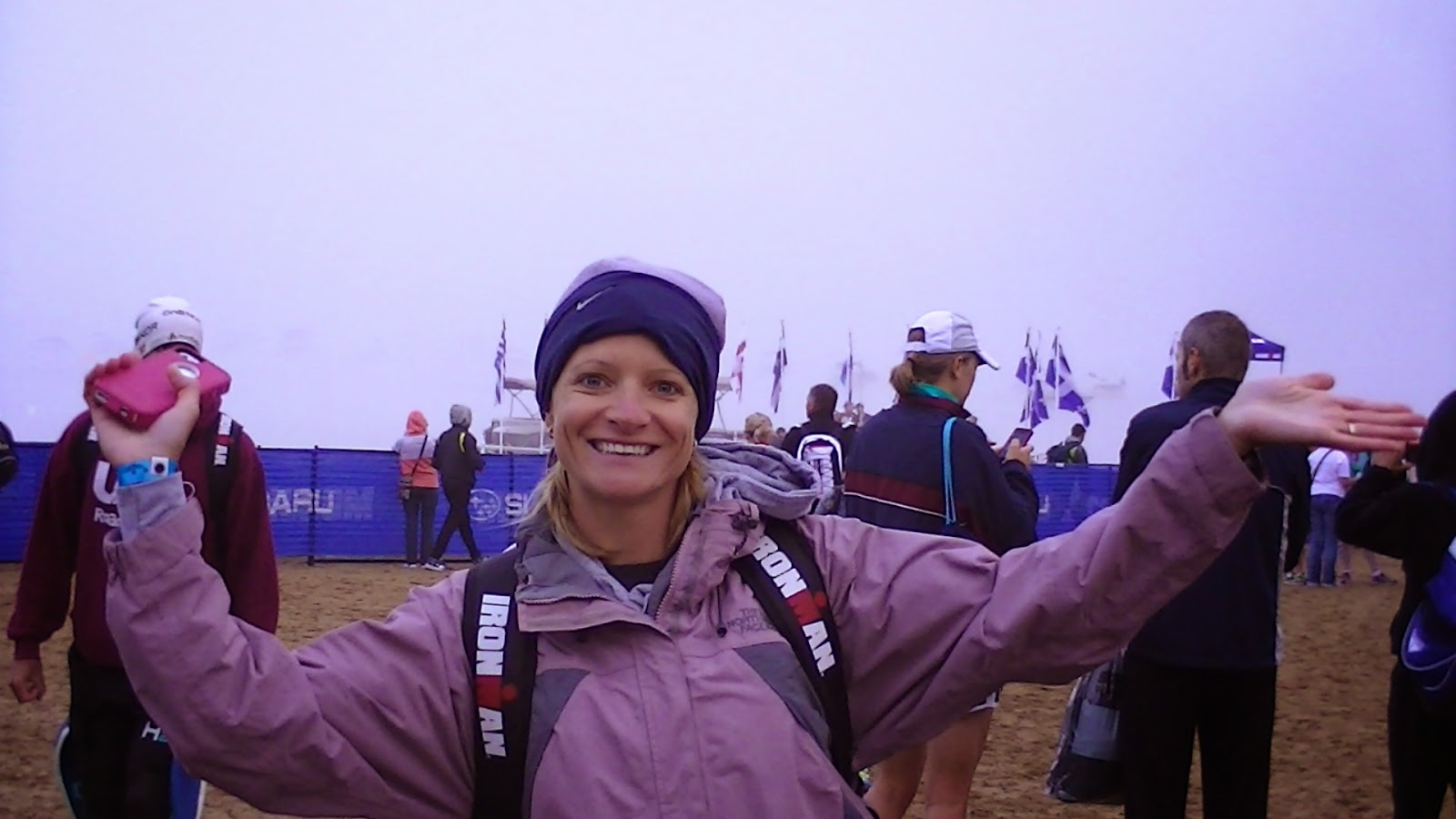 Lets go jump in a lake! 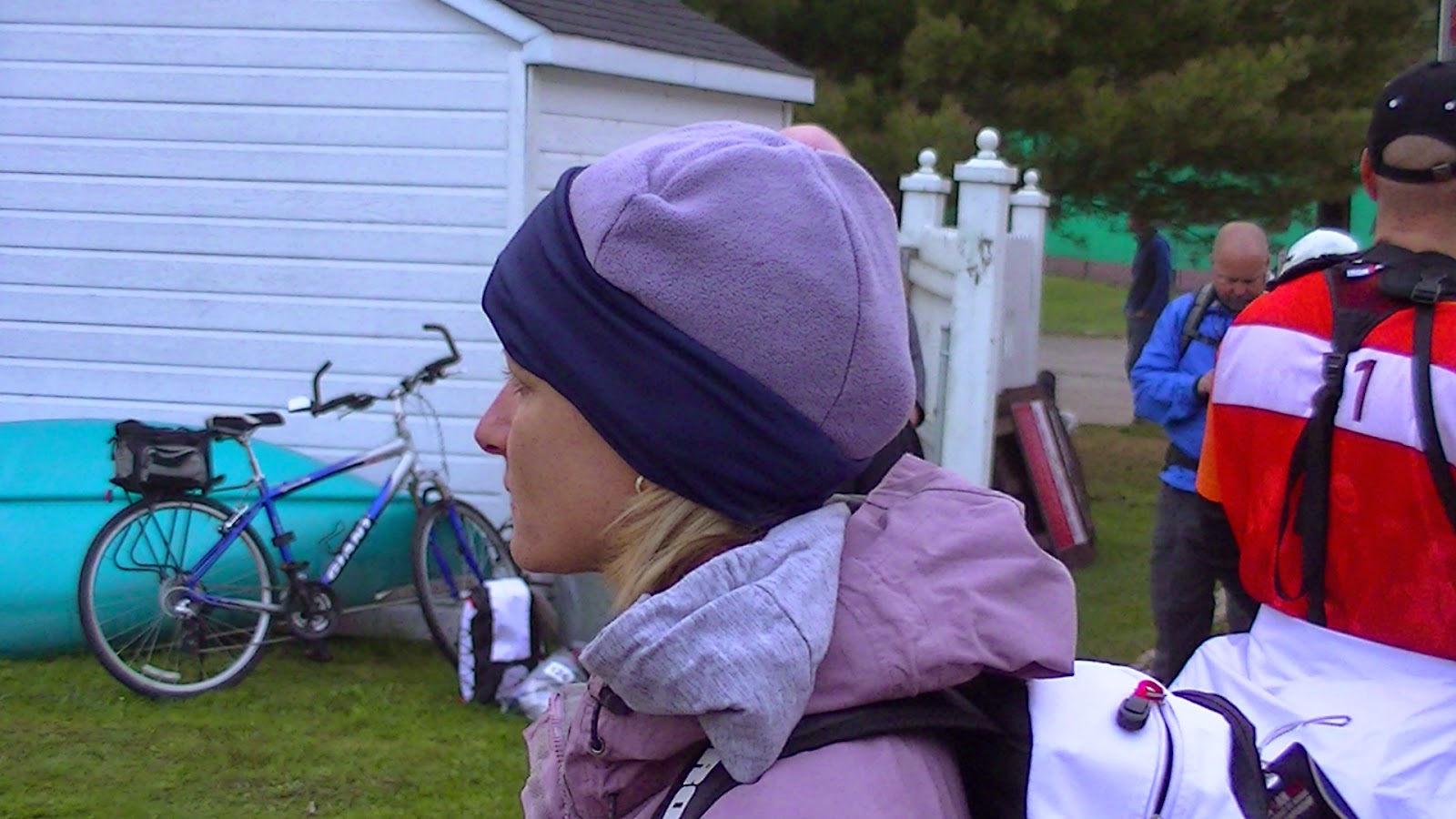 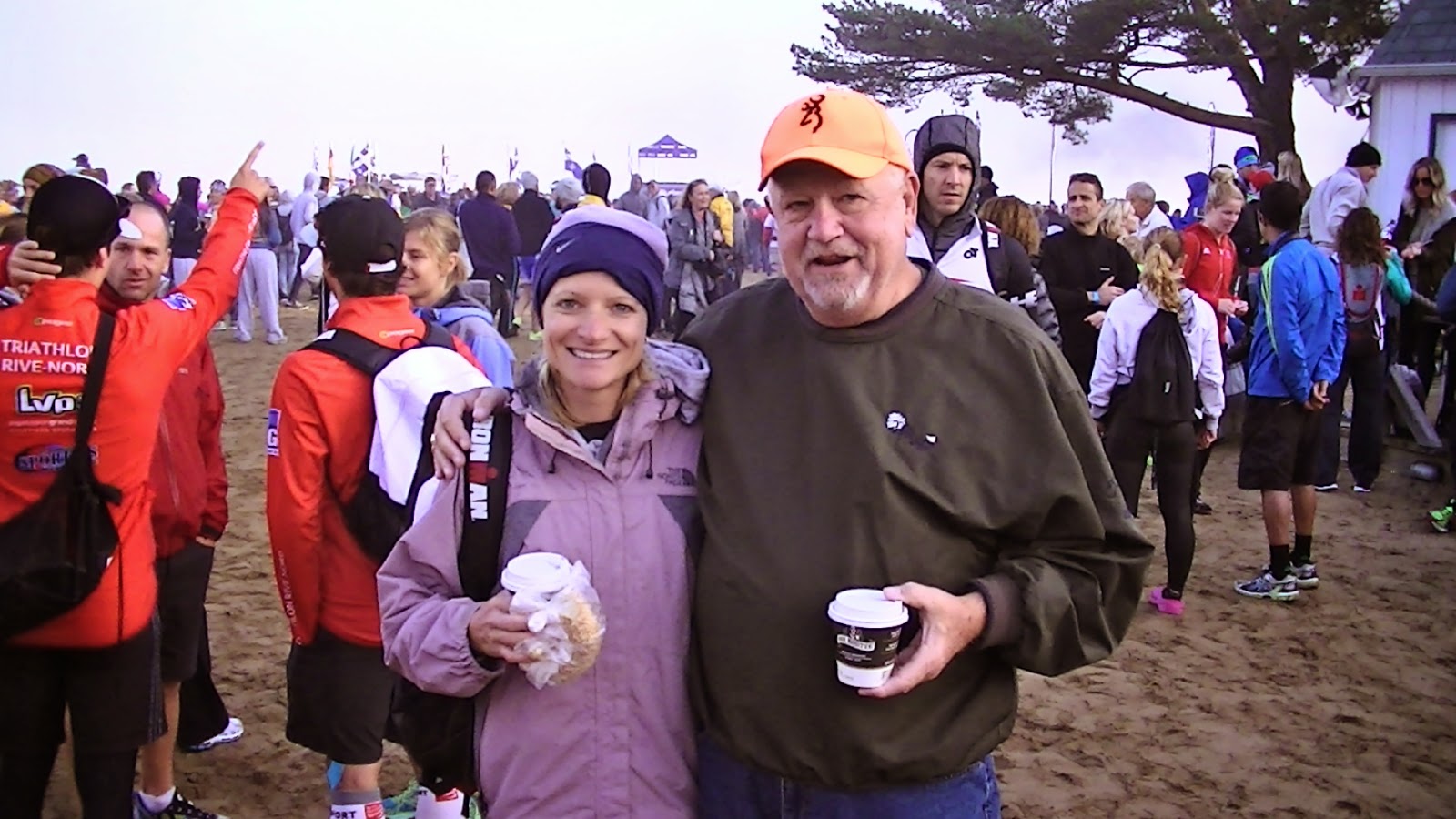 Coffee, bagel and hugs from daddy are all you need to set the race off right. 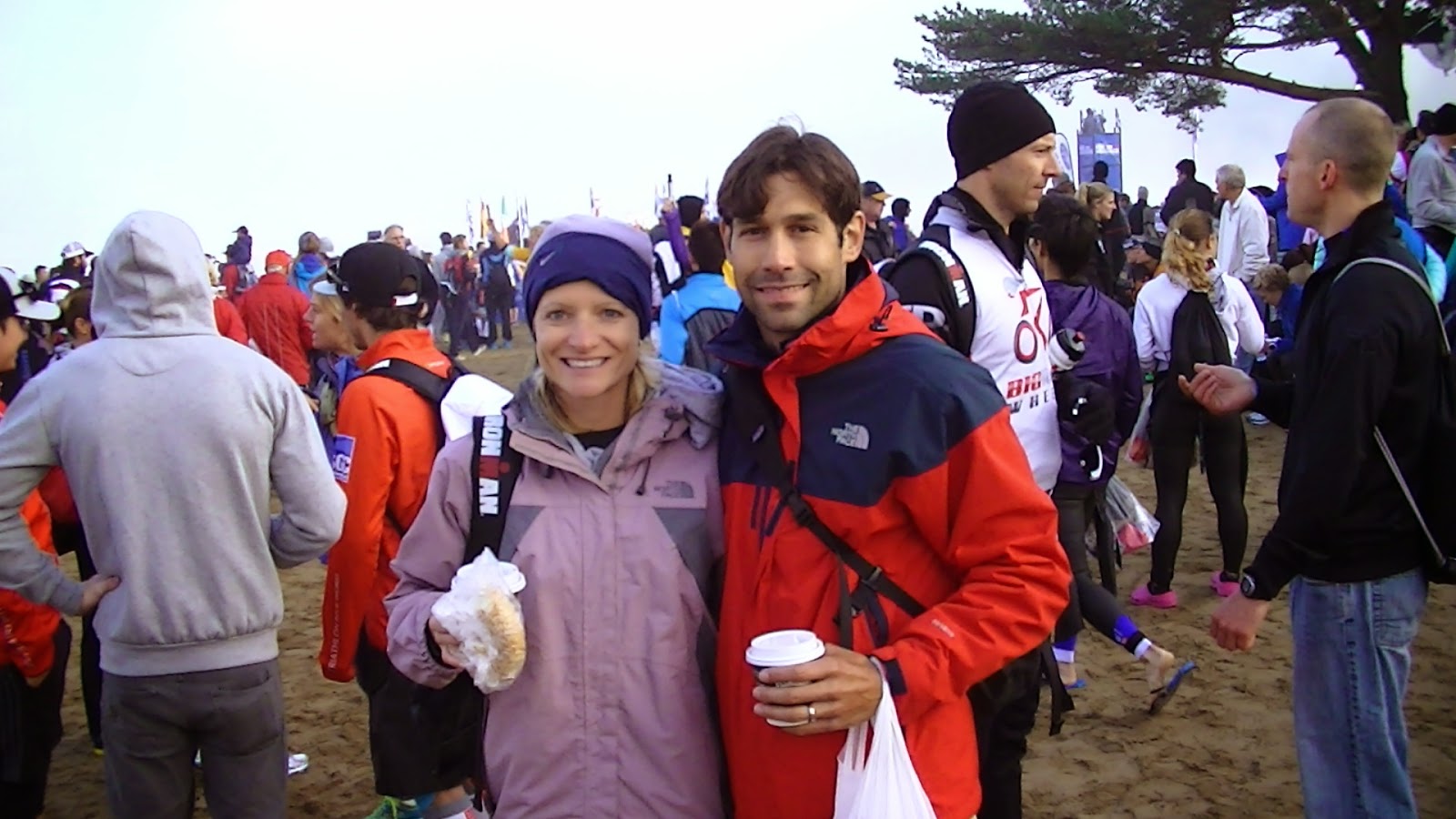 And of course my ever supporting husband. 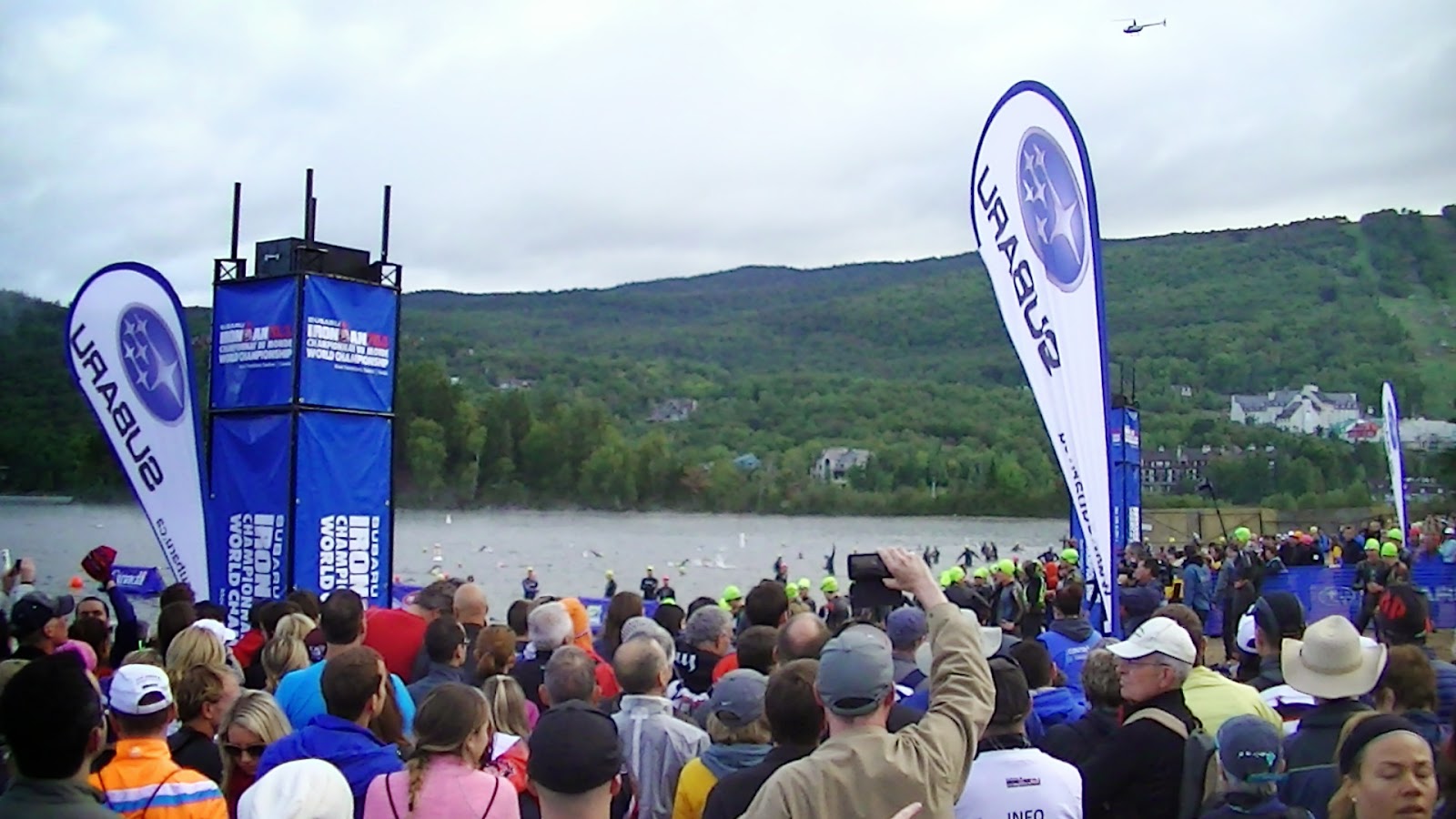 The start was AMAZING!!  Fog was lifting off the water, athletes were everywhere.  Some were running, some were swimming and most (like myself) were just taking it all in.  The Canadian military played the national anthem, someone said a prayer and for the professional start their were fireworks and fighter jets that swooped by.  I am getting goosebumps just thinking about that morning. 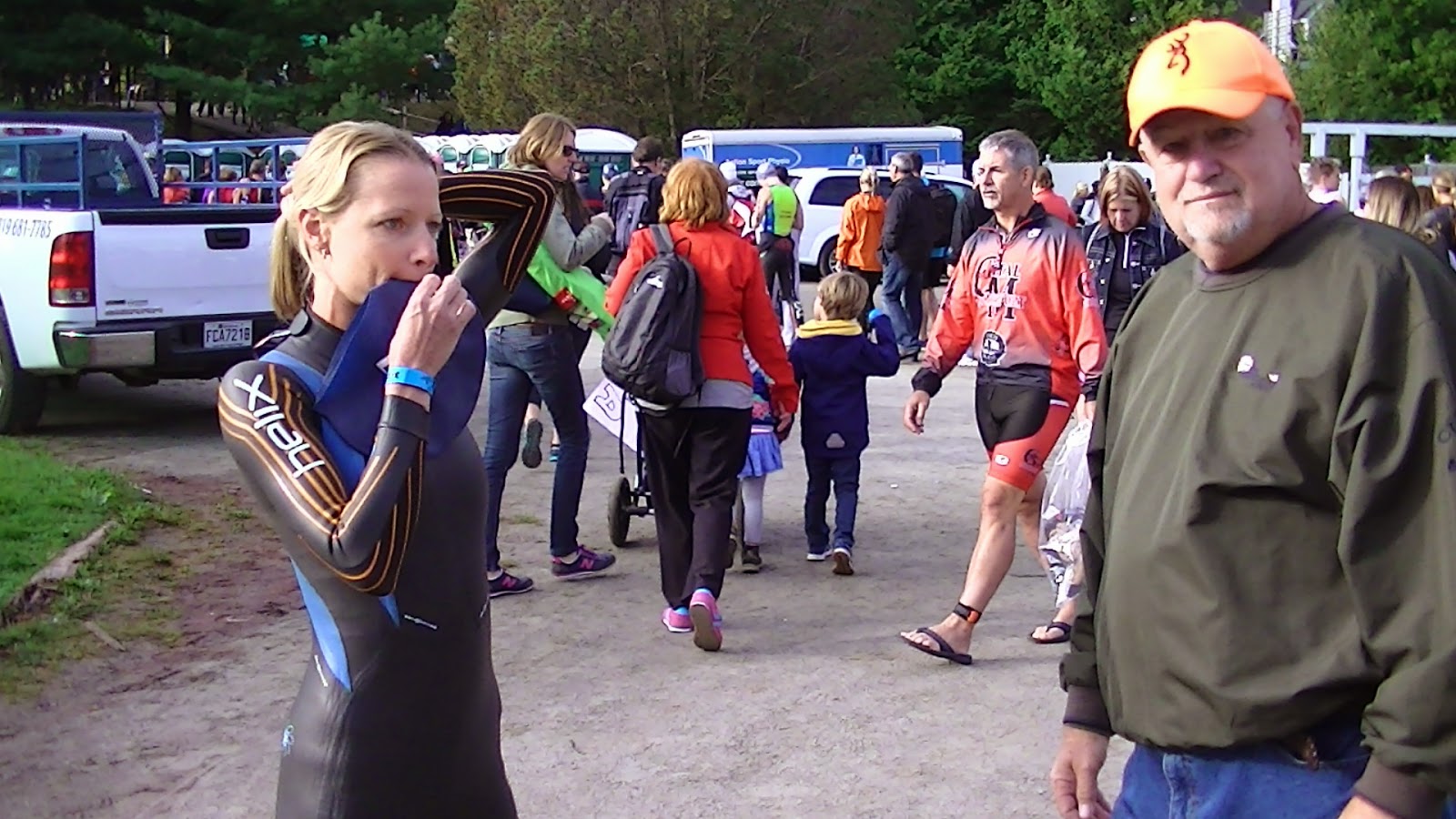 I had plenty of time to start.  I think I was the third to last wave in the water.  There were nearly 1800 people in the water ahead of me. 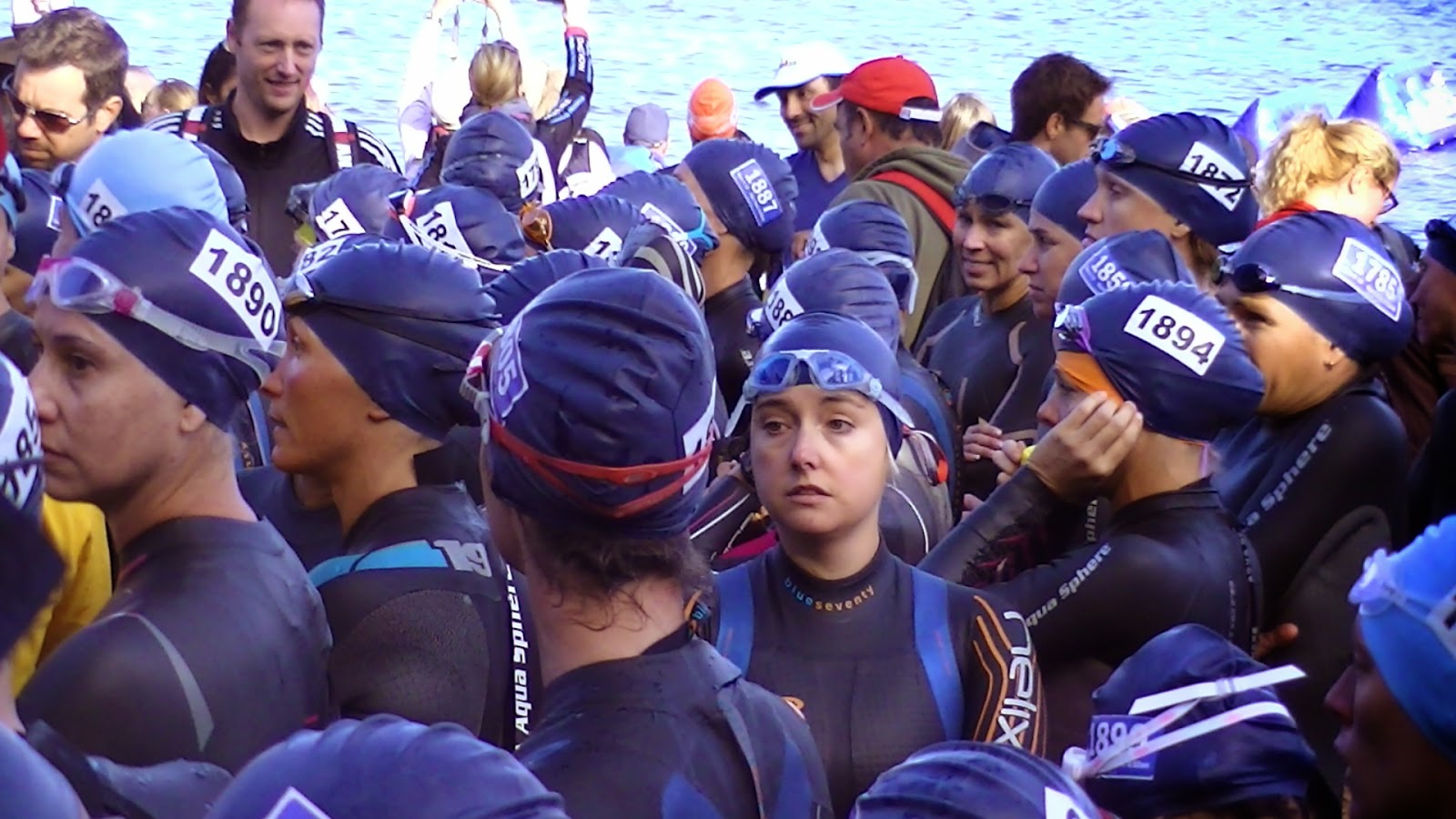 My wave of blue caps waiting for our single to start.  Each wave start was signaled by fireworks.  So, so cool. 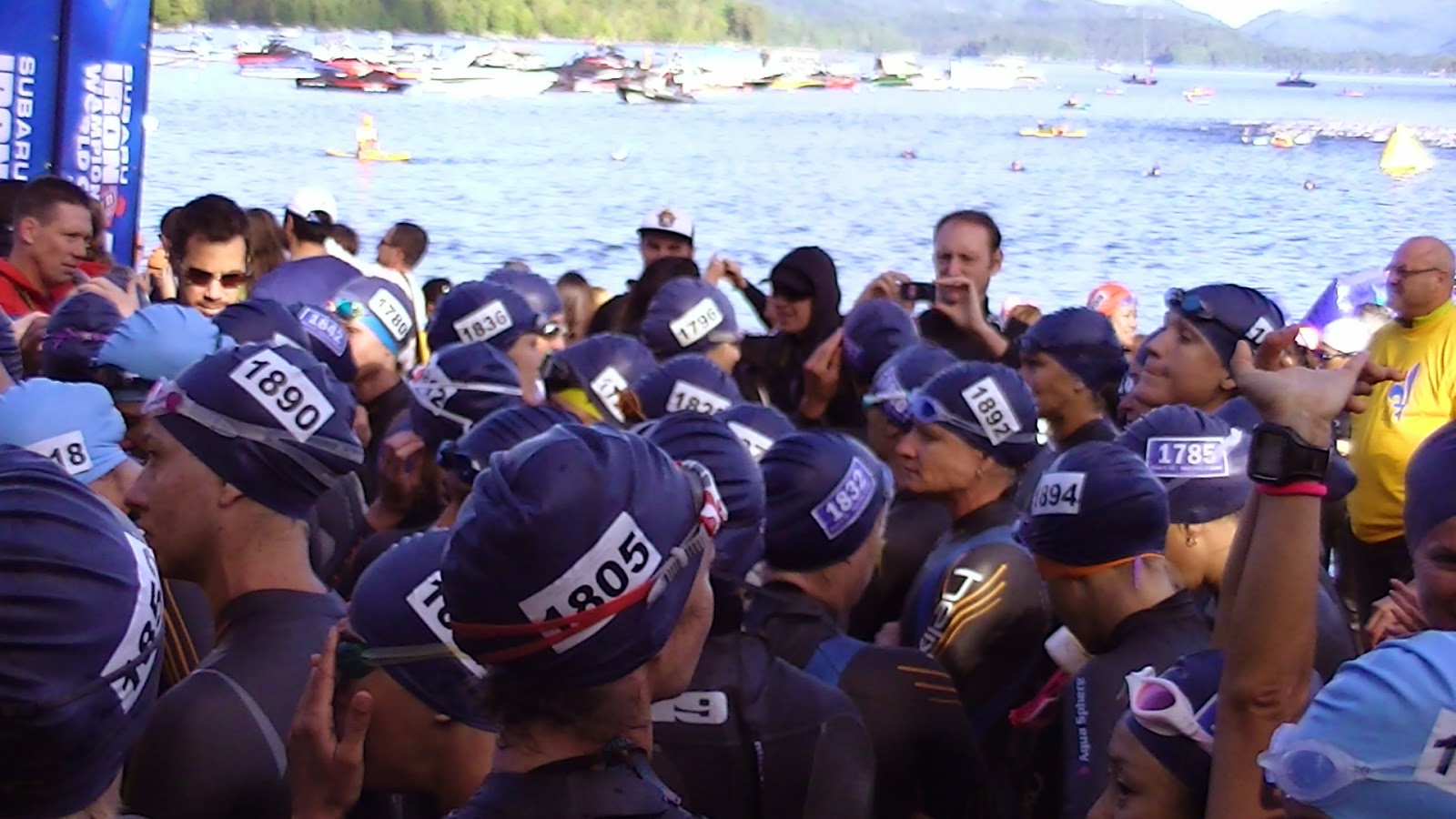 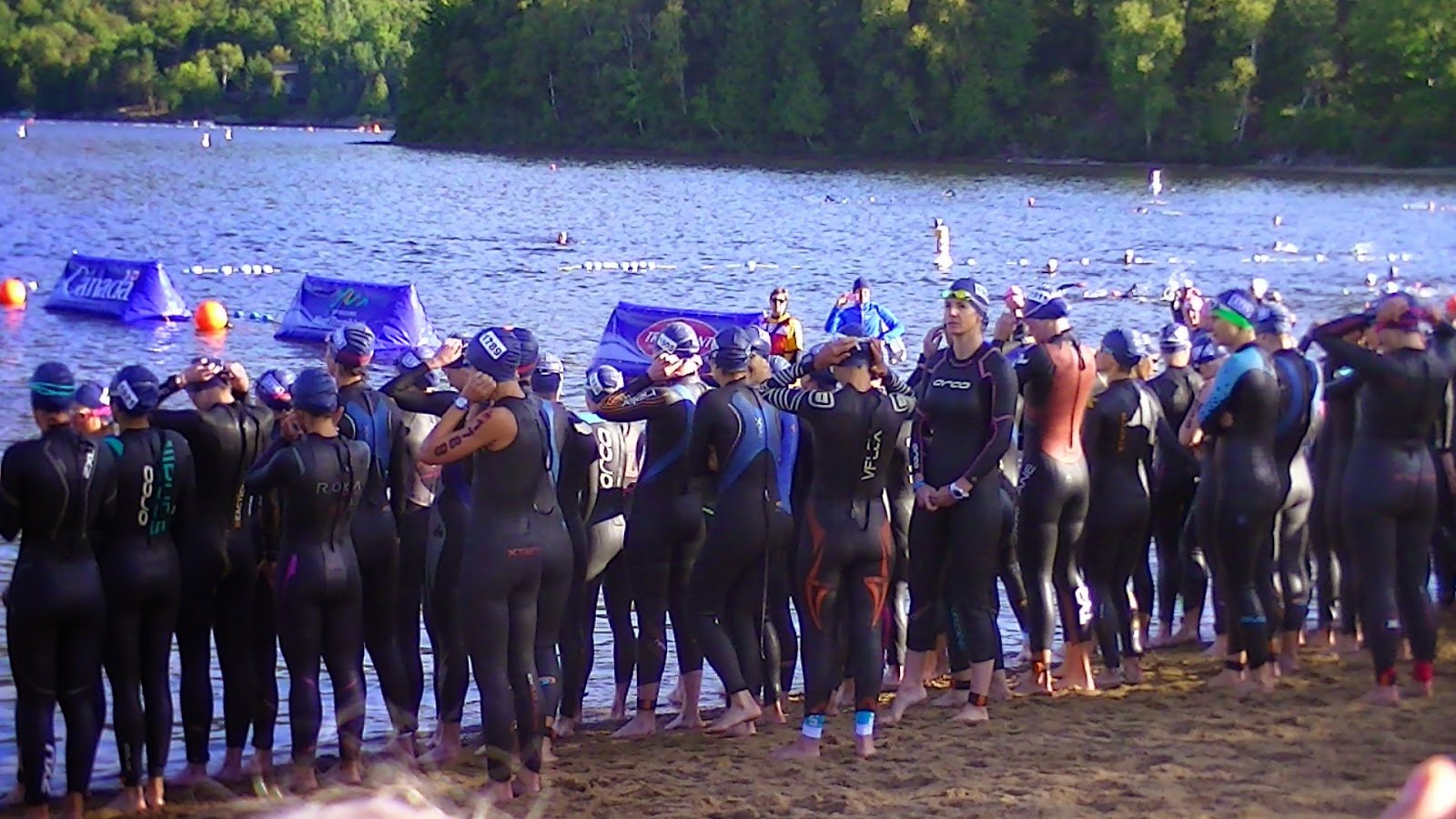 It was a beach start.  The first time I had to do this kind of start.  I practiced in the water a few days before and it seemed fun and easy enough.  I didn't think about there being so many people in the water I wouldn't have a place to swim and jump in.  I literally ran in and took a flying leap over people with my eyes closed.  I hate the first 400 yards of the open swim.  It is a dangerous fish fight.  I had anticipated finding some clean water after the start but in this race we are all GOOD.  Everyone is about the same so there wasn't the spreading out that I was used to in the past races.  We started together and we all stayed together.  This was a RACE. 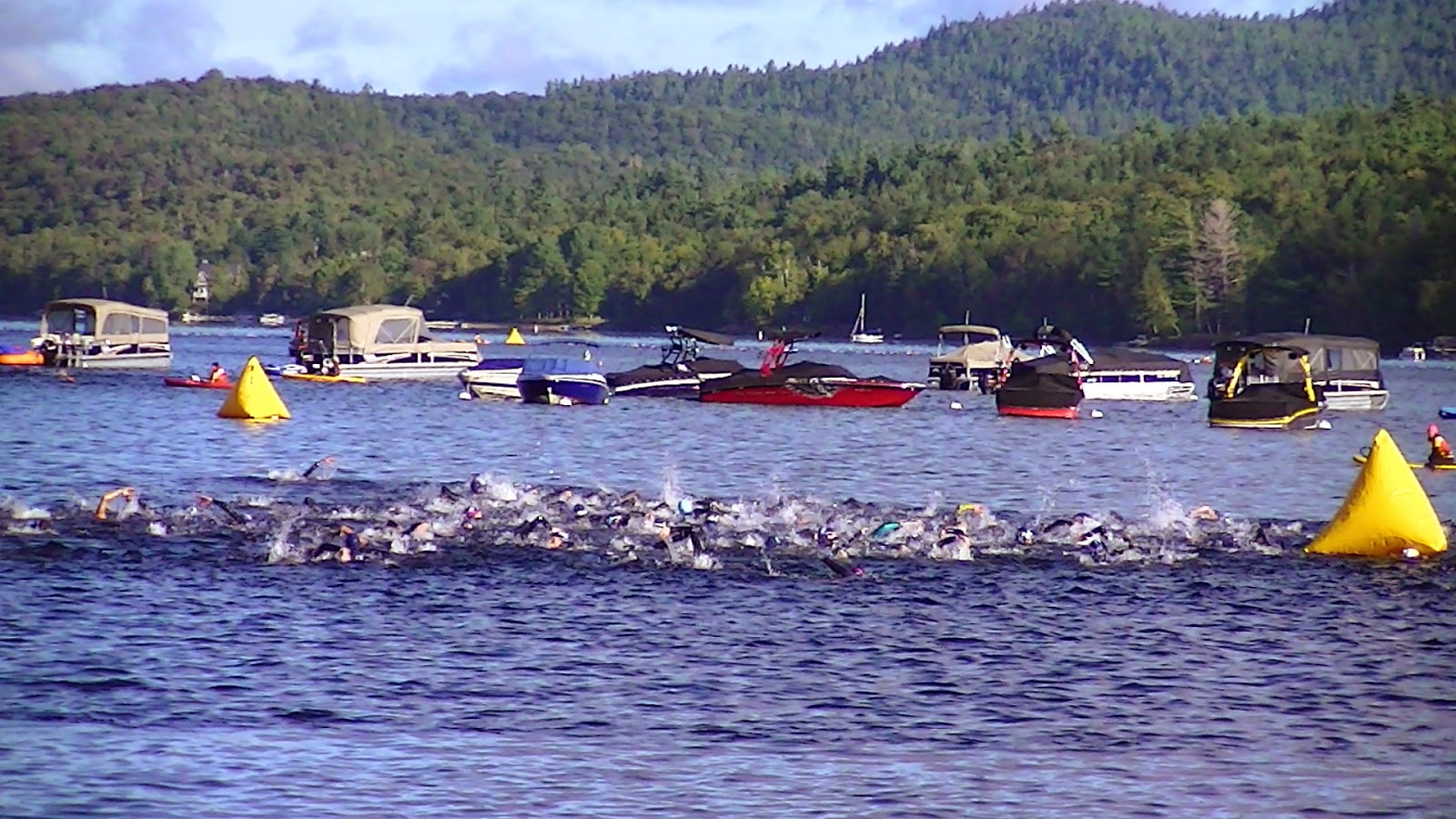 I'm out there somewhere in crystal clear Canadian water.  I was scared.  I was happy to finally start.  I was proud of how far I had come. I am now a World Champion finisher.
Posted by Jaime at 10:54 AM