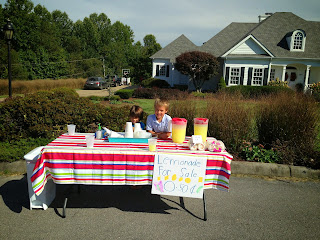 Cutest entrepreneurs I've ever seen!  Hunter begged all summer to do a lemonade stand.  He really wanted to do it and I really didn't want to do it and before we knew it the summer was gone and we never had the stand.  One weekend he asked again and I said Ok but he was going to have to do the work.  I would help but the majority of the effort would fall on him.  He was fine with that and off we went to the store to buy supplies.  Over the weekend he made his sign and decided he wanted to sell cookies to go with the lemonade.  What a deal he had going on!  You could get a nice cold glass of lemonade and a cookie to go with it for one dollar!  The following week we had our stand set up for a Tuesday after school.  Since we live on a cul de sac I knew we weren't going to get much traffic so I did what all moms do and send out a massive text to all friends and family that Hunter is selling Lemonade.  As much as it pains me to day this adventure turned out to be loads of fun and a great experience for Hunter.  All the people I texted came buy for a nice refreshment and brought their kids (all of whom ended up playing in the yard) and the lemonade stand turned into a block party!  I was very proud of Hunter through all of this.  He never left his stand.  He diligently stood there while all of his friends were playing and begging him to play.  He never wavered.  He refilled cups, cleaned up spills and counted out money.  His stand was a success and after a few hours he cleared close to 60 dollars!! 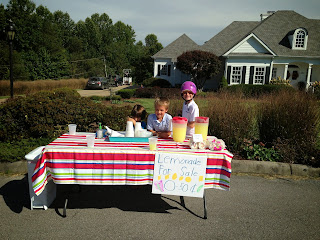 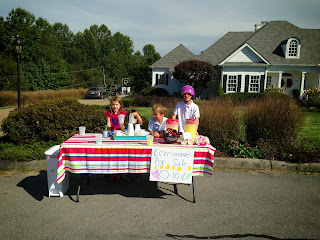 Hunter and early, eager helpers.  Thank you to all that came over and helped make Hunter's day!
Posted by Jaime at 5:57 PM