Halloween and Trunk or Treat 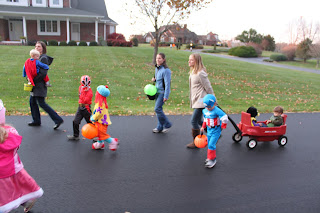 Here goes the gang. We have a wonderful group of friends here in Abingdon and for them I don't think we could ever move! All of our kids are (give or take 9-12months) are the same ages, go to the same preschool and most of our spouses work together. It is a wonderful blend of adults and kids and we have a fantastic time together. The Dawson's live in Glenrochie Country Club and opened up their home for all of us start the Halloween festivities. 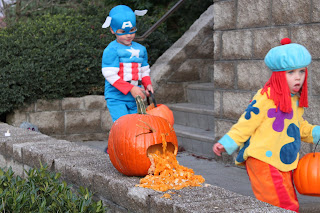 Gross. That is exactly what Hunter said when he got back down the stairs from this house. Funny thing is an ER physician that works with David created this piece of art. Couldn't he just leave it in the ED? 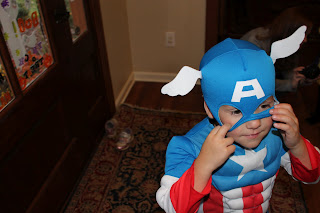 Captain America pulling down the mask and ready to score some candy! 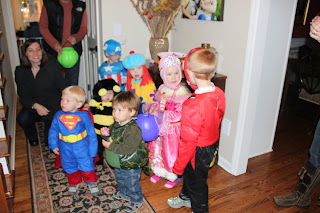 Here is the crew! Trying to get a picture was next to impossible considering the excitement in the air and 4 one year olds! 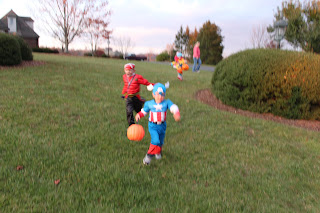 Captain America led the way from house to house. You know when I remiss on past Halloweens Hunter has been so shy and we usually had Chloe help him to the door and stutter 'trick or treat.' This year he was a professional trick or treater. There was no bashfulness and our normally pokey little puppy literally ran for about one hour scampering from house to house. There was one elderly couple who had set up a game for the kids to play. Normally Hunter wouldn't be interested in a game that he didn't know, much less speak during the game and speak to folks he didn't know...but when he saw the prize was an extra large piece of candy he stepped right up to the plate, got the correct answer and scored a movie size box of Raisenets. Funny how his personality changed once candy and a superhero costumed were involved! 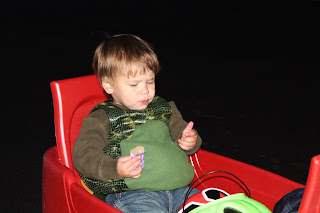 Where Lucas spent the evening trick or treating. We eventually had to hide all sweets from view and have him abandon ship back at the Dawson house. 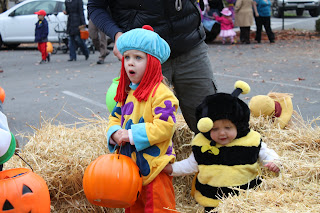 Emerson and Larkin at the trunk or treat. 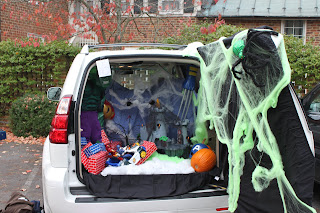 My car this year had a super hero theme. I thought it was my best idea yet, but I didn't even place...bummer. 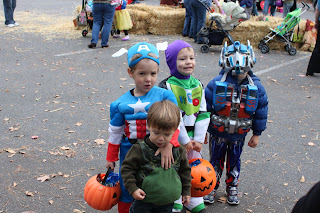 Hunter and his buddies, Buzz and Optimus Prime. 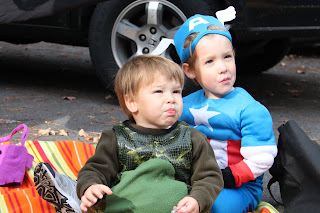 Going through their candy bags. It was supposed to be a pot luck lunch after the trunk or treating but how many of the kids do you think actually ate a bowl of chicken soup after 45 minutes of candy collecting. Yup, not many. Most dined on smarties, lollipops and juice boxes. 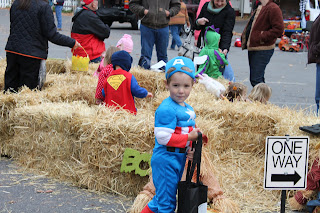 Captain America about to enter the search and recover hay maze. 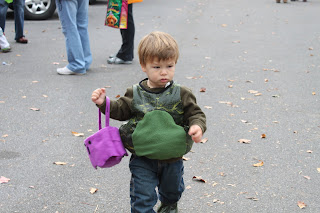 He was so grumpy this day, but he did realize that he needed that little purple bucket to put all his candy in.
Posted by Jaime at 7:25 PM