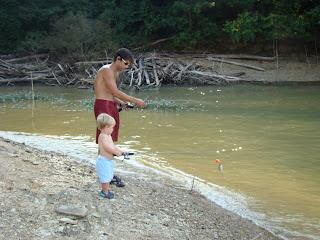 Hunter taking some whacks at this poor fish! 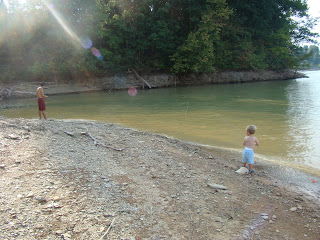 David trying to fish...in a little bit of peace. 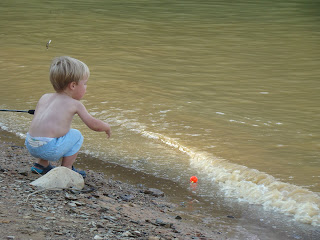 He needs to learn to throw it out just a little bit farther. 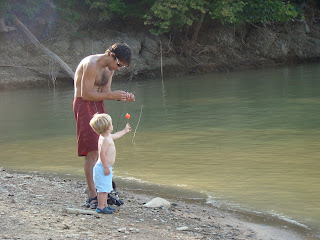 Whew! It has been a whirlwind past couple of weeks for the Simmons fam! We have had lots of beautiful weather and lots of company with family and friends. We have also enjoyed some nice days together just the 3 of us. We were really lucky with David's schedule and he had the first two weeks of September off. We always have fun when David is home but sometimes I think we are even busier than when he is working! He is so much fun and full of energy, Hunter and I just hang on for the adventures.

Hunter is really starting to enjoy the boat more and more which means we get to enjoy the boat more. The water level of South Holston lake is controlled by a dam and the TVA. Every summer they raise the level of the water for recreational reasons I suppose and then they drop the levels in the fall. We really enjoyed the lake when it was full, but now that the water levels are lower there are several places around the lake to dock the boat and let Hunter out to explore, fish and swim. Yes, I said SWIM! He loves it and will go just about anywhere that David goes as long as he has on his Micheal Phelps suit. We were out one afternoon and he was just floating in the water and David yells to me, "Is it close to naptime?, Oh yes you should probably come on back to the boat. David--I think he has fallen asleep in the water." He also likes to fish. David gives him a rod without a hook and Hunter just casts and casts and casts until he gets bored watching the bobber....or if David catches a fish. David has actually caught a couple of fish despite Hunter's brutal attacks on the water with his rod, but as soon as David yells, "Hunter, I got one!" Hunter frantically beats at the fish with his rod and wants to step on it as soon as David gets it off the hook. It is quite the show and the poor fish is scared to death, I'm sure.