What's up with Lucas 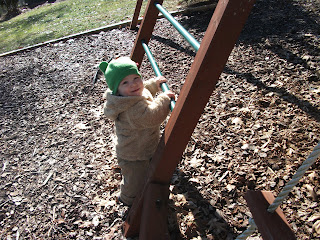 Trying to get up to the slide! 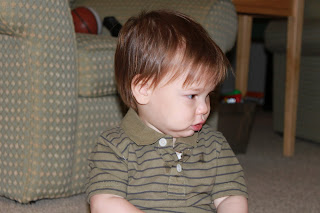 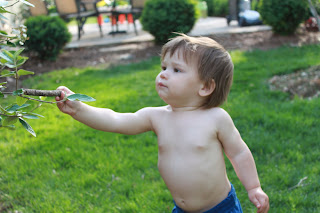 Our first 80 degree day and Lucas loved it. Our boys love being outside. 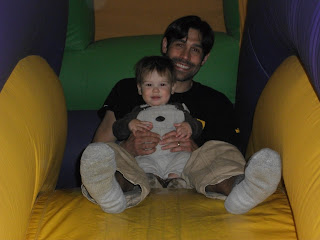 Going down the slide with daddy at Wallabies, an inflatable jump house that is lots of fun. 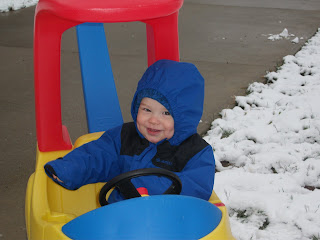 Lucas spend a lot of time in the little car during our snow days. He tolerated wearing all the gear like a champ. I guess he learned pretty quickly wearing all that stuff meant he got to go outside. 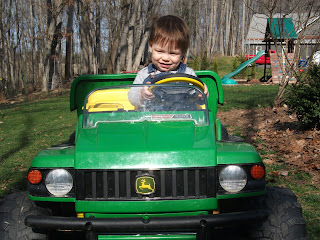 He can't wait for the day when his feet actually touch the pedals. Right now he settles for rides around the yard with Hunter. 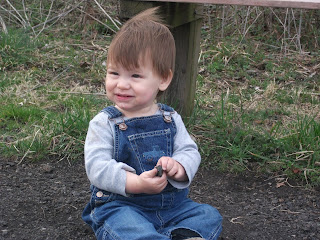 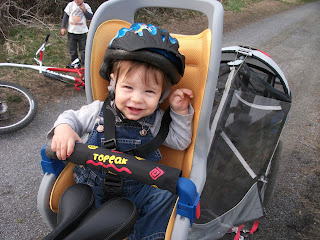 Bike ride on the Creeper sporting his new bike helmet.

Well, I could go on and on about the changes with Lucas. It seems that just so many things take place during the first year. We had this tiny baby that didn't do more than sleep and eat to a running, babbling toddler in just a year. Unlike his brother at this age, Lucas is fearless and outgoing. He is all smiles and happy just about every waking moment. We have had some issues with sleep lately but those are quickly passing. Poor guy has had a terrible time with ear infections (1 a month since 3 months old, YUCK) so 2 weeks ago he had ear tubes placed. Hunter has them as well, but he was 2.5. It made the world of difference for him so we are hoping they do the same to help Lucas. In addition to his bubbly personality he is a very quick learner. It is amazing to watch him catch on to things and attempt to do everything his big brother is doing. David and I can show him how to do something one time and then he gets it. There is no guesswork to his dislikes. Little Lucas has quite the temper and unrelentless determination. He is strong willed and David and I work hard at redirecting, but needless to say, discipline with him has started early. I find this part of parenting the most challenging, especially at this age when they just don't understand.
Some milestones for Lucas
1.) He was crawling and pulling up at 5 months old!
2.) His first word was "dada", Hunter said "moma" first so I have had to let this go
Words he says now: moma, dada, uh-oh, go-go, look, moo, ga-ga

3.) He started really walking about 2 weeks before his first birthday. He was taking 6-7 steps since 9 months, but he was mostly still crawling

4.) Stayed in the nursery for the first time at the rec center. He had a wonderful time and unlike Hunter at this age he wanted down to play not to remain glued to my arms! He will LOVE starting preschool in the fall.

He is a wonderful little boy and just as sweet and cuddly as his brother. They are two different little people and like I posted earlier, I am blessed to be their mother. I look forward to every single day I get to spend with them. I only hope they enjoy spending so much time with me!