Let's hear it for the Iron Kids! 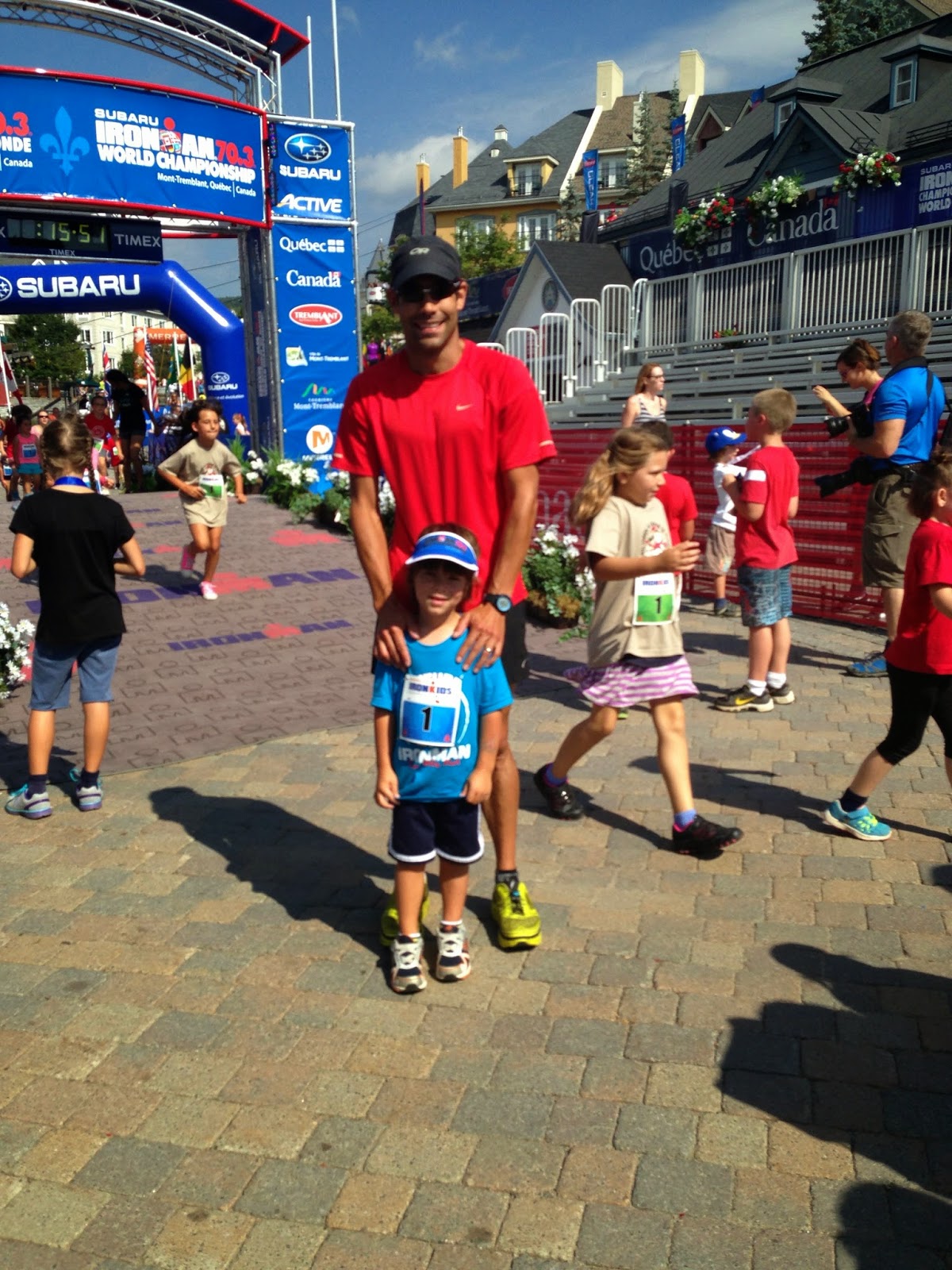 At most Iron man events there is a family or kid fun run the day before the big race.  The World Championships were no exception.  They had a one mile fun run for the little guys and a 5k for the older kiddos.  Lucas wanted to the do fun run and Chloe and Hunter wanted to do the 5k run.  This event was HUGE!  The whole town was involved and local elementary and pre-schools from all over Montreal came to participate.  I bet there were over 1000 kids in the one mile event with Lucas.  It was crazy and so, so exciting.  David ran with Lucas and this was the cutest little photo of the two of them after crossing the finish line.  He was so proud and each participant received on official Iron Kids medal. 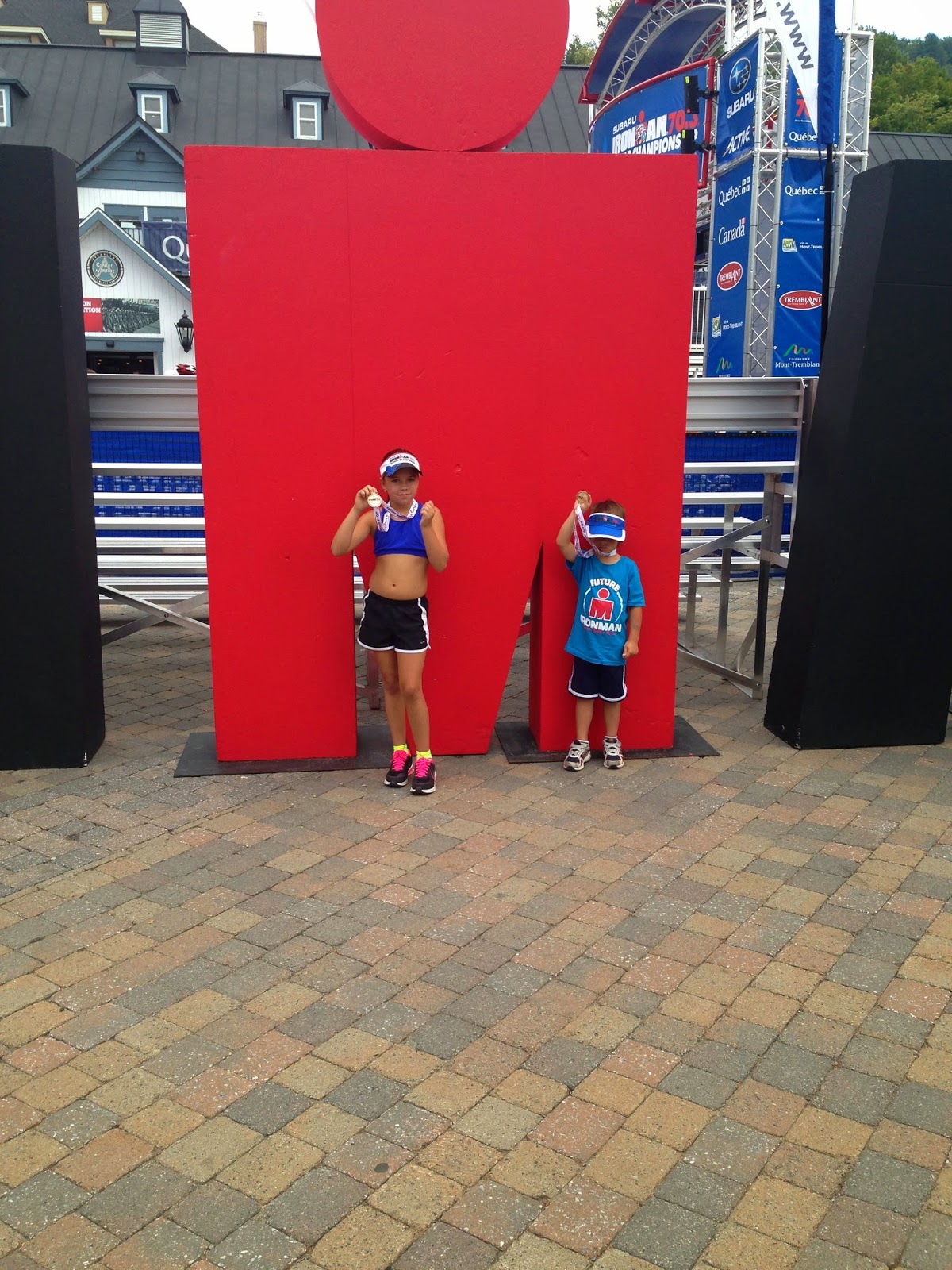 Our 5k champions! I was supposed to run this race with these two kiddos but the timing was off.  I told them to go line up at the start, stay together and I would be right over after snapping a picture of Lucas and David at the finish.  Little did we all know, they started the 5k race before all the one milers finished!! Chloe and Hunter took off on their own and we were left on the side lines cheering them on.  The each ran well and enjoyed the accomplishment of running 3.1 miles and earning their official Iron Man medal.  There was only one little hiccup. We lost Hunter!!  This was the scariest moment of my life!  He was ahead of Chloe at the half way point but she crossed the finish line way before him.  I ran the last half of the race with Chloe for encouragement and never saw Hunter.  We were all petrified.  There were 1000s of people out for this event and little Hunter was missing!!  Finally, he crossed the line.  He made the mistake of running the lap around the lake twice!!  Poor guy ran almost 4.5 miles.  He was a trooper and once I say his sweet face cross the finish line I could feel my heart start beating again in my chest. 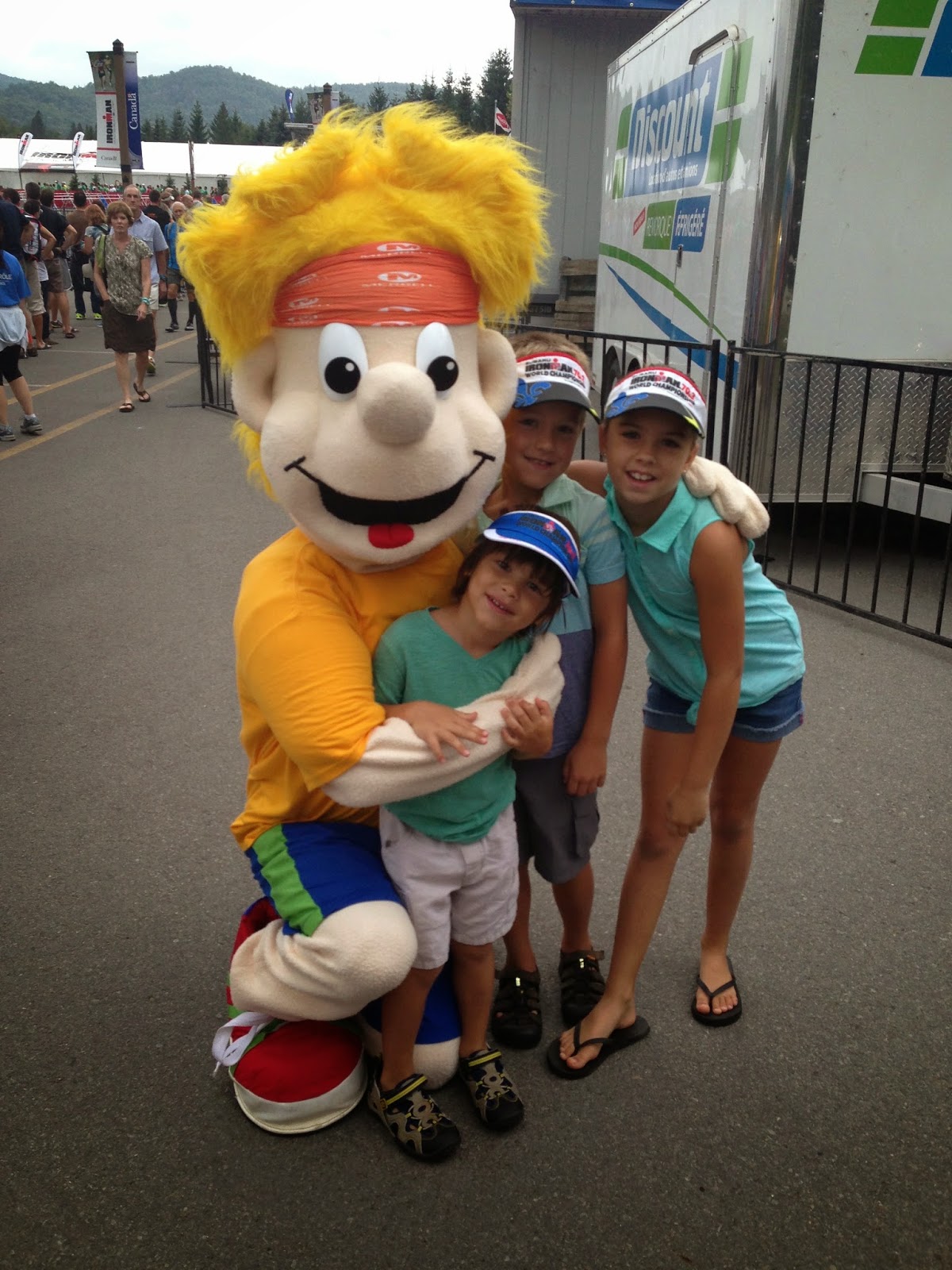 The cutest kiddos in the world pausing for a picture with the Iron Man himself. 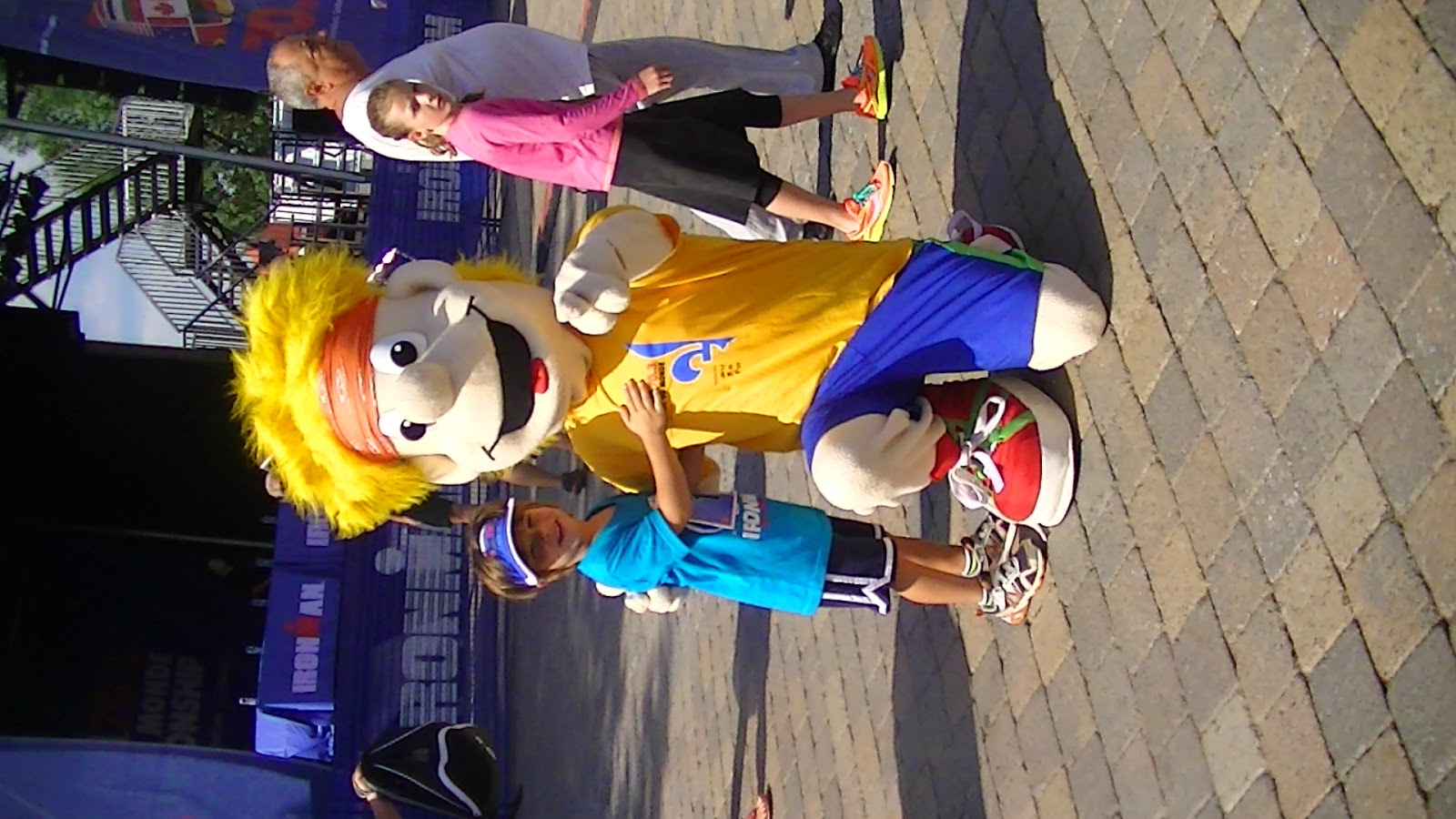 Turn your head or your screen around but this was too cute not to post. 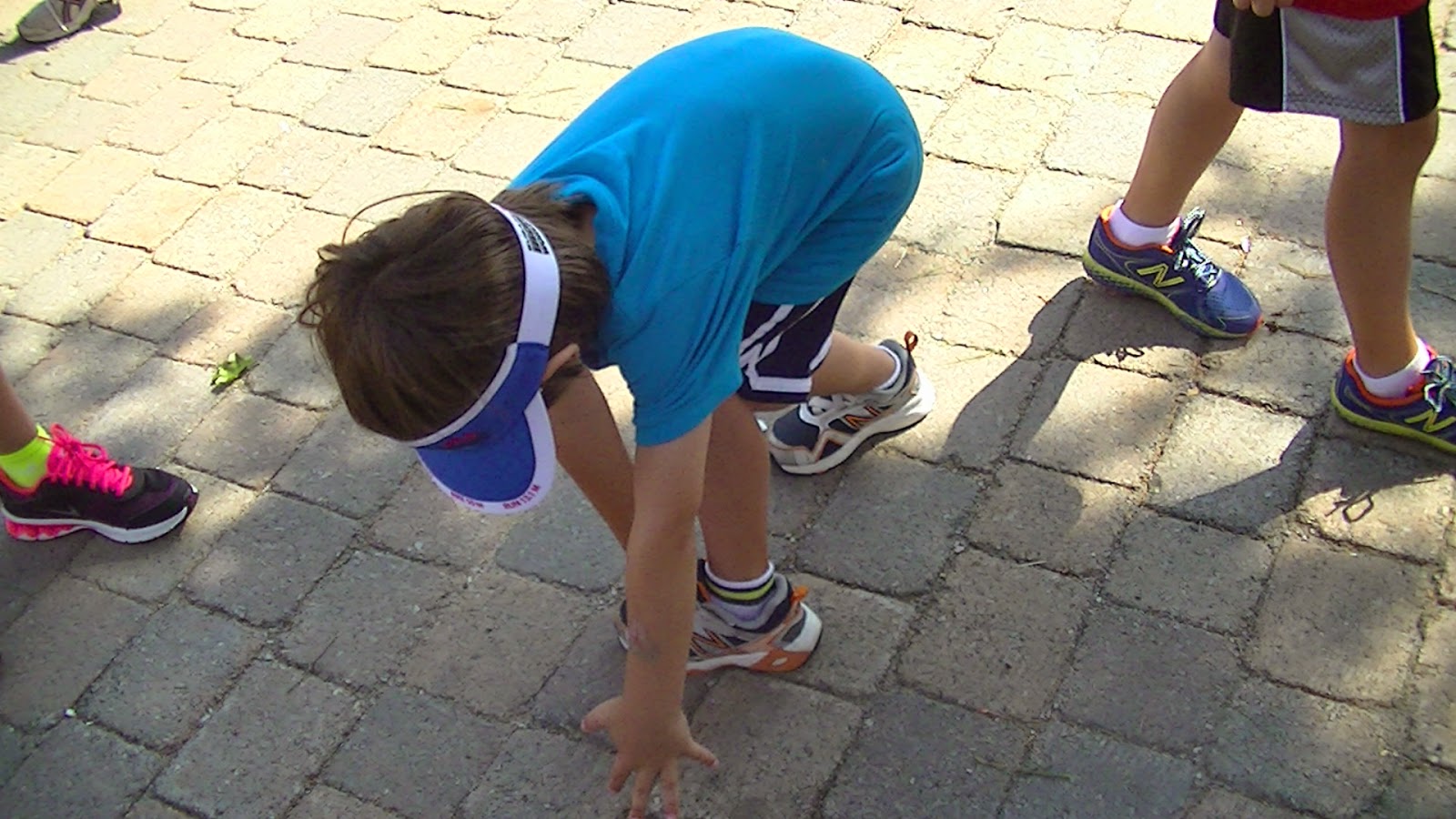 Lucas deciding he needed to do a few stretches before his big one mile race! LOVE IT! 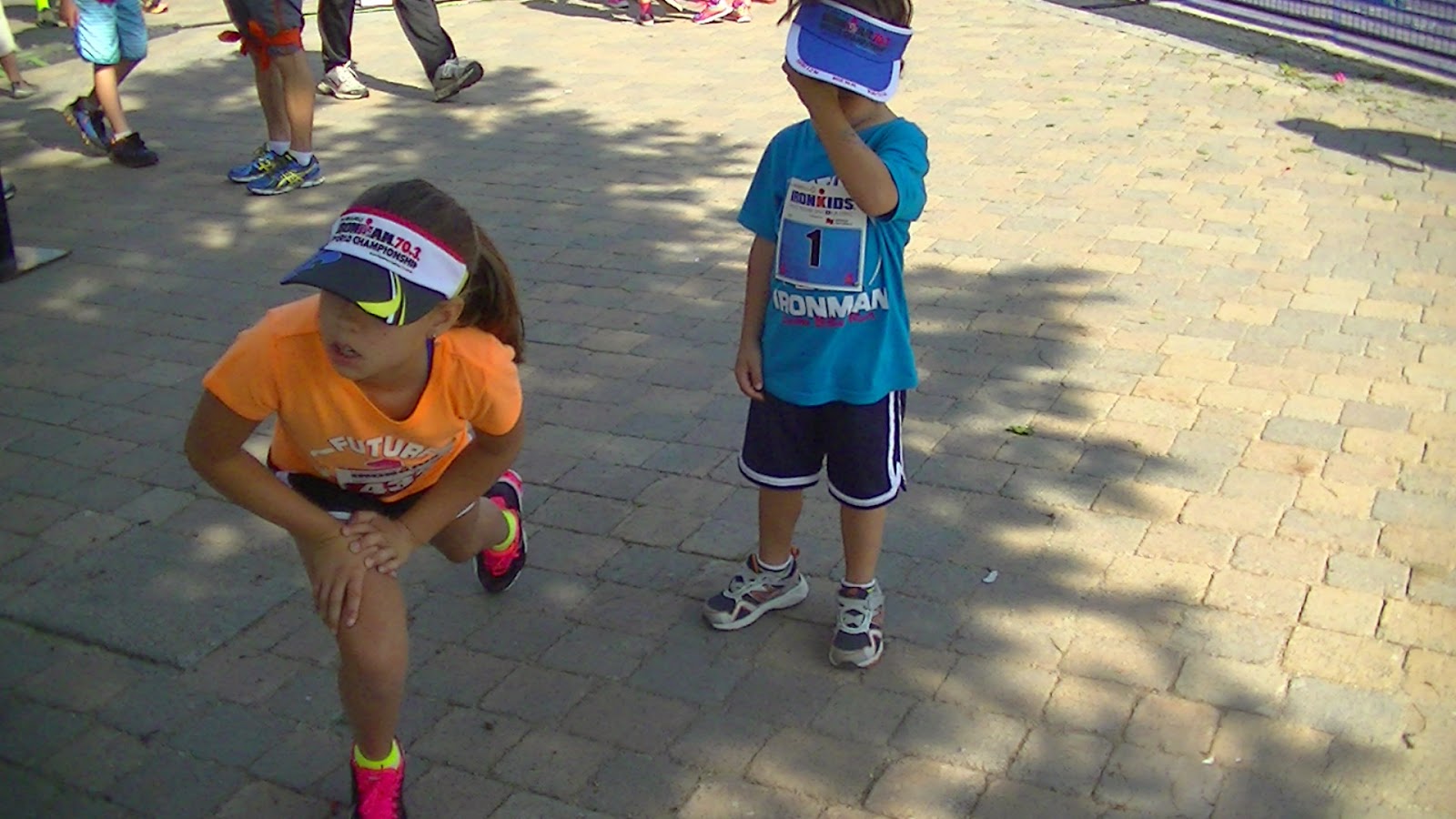 Chloe and Hunter decided they should do the same! 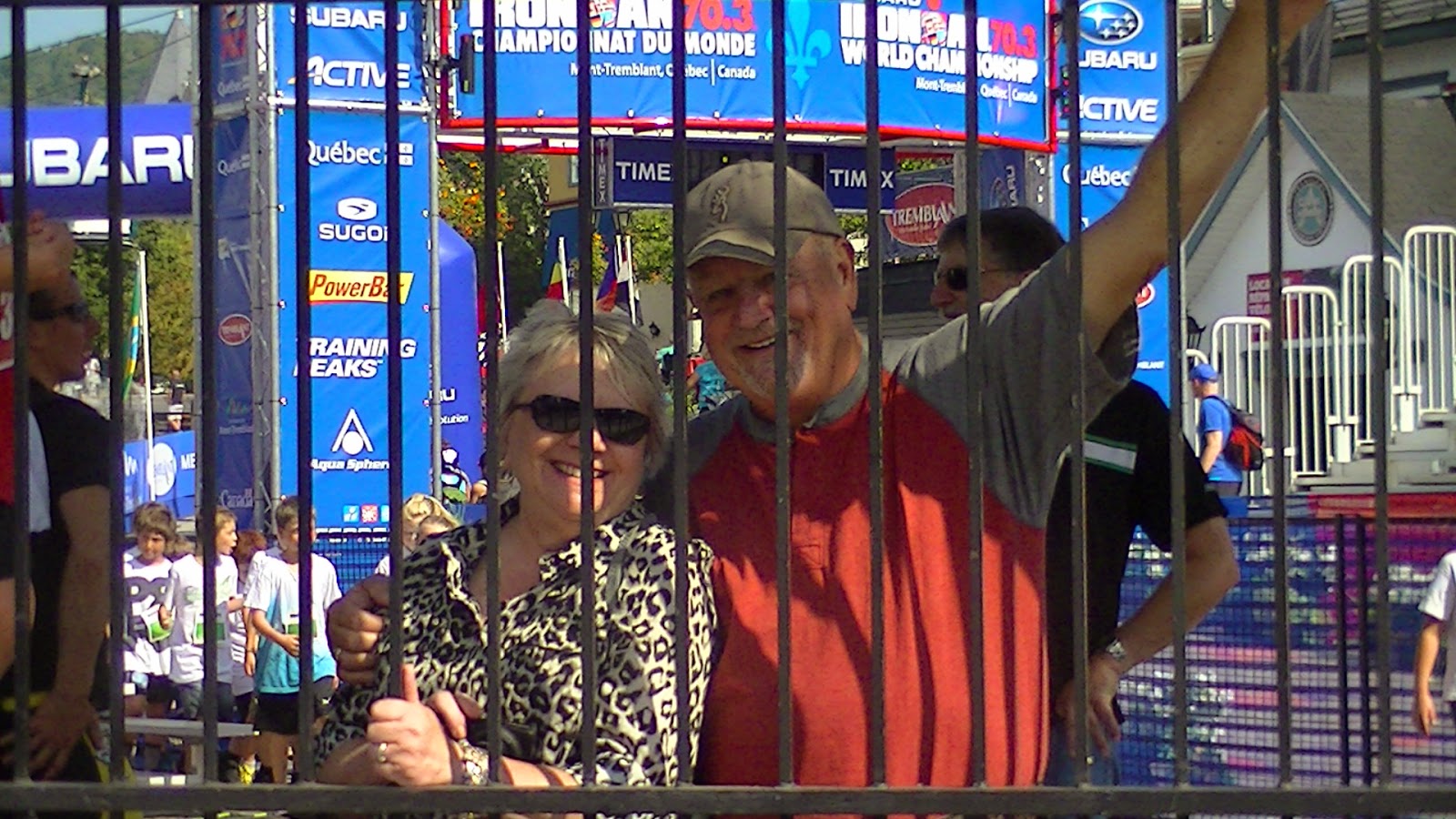 Behind bars and waiting for the kids to take their places along the starting line. 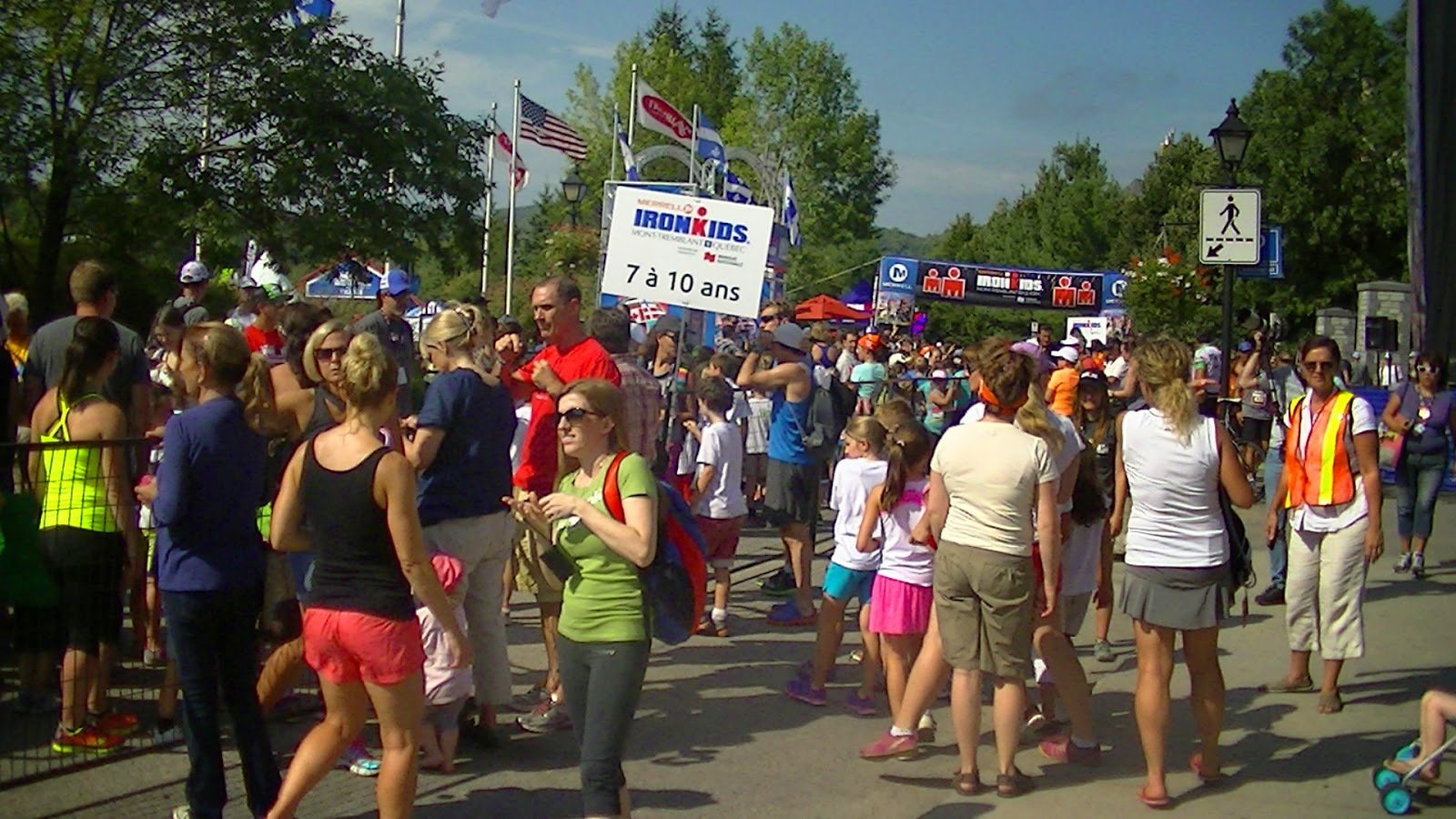 This is what it looked like for Lucas's race.  They had signs for each age group and their were at least 200 kids per age group until you got to the 5 and under group, then it thinned out. 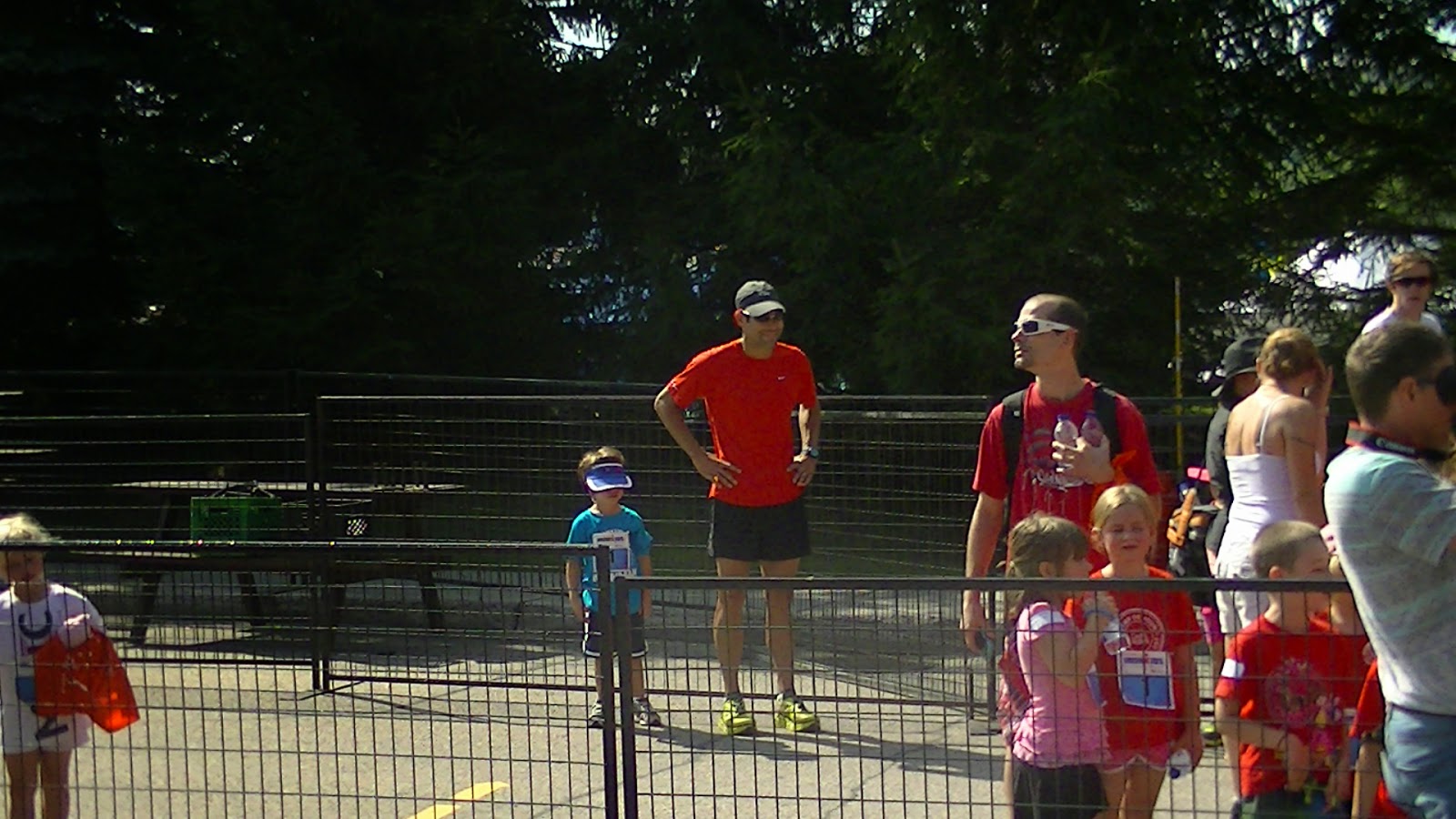 David and Lucas at the VERY back of the pack.  I bet it took them 5 minutes to cross the starting line once the whistle blew! 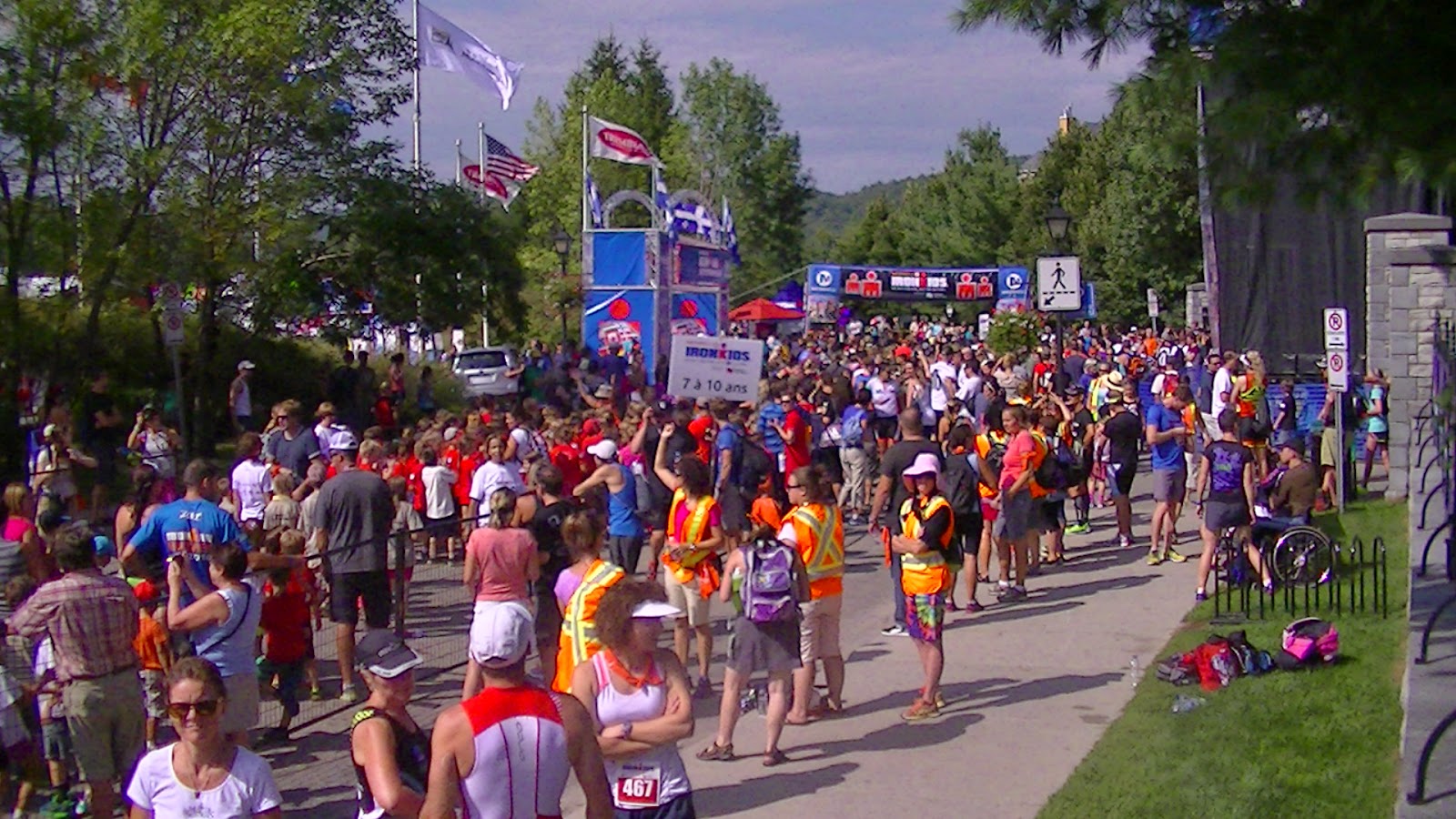 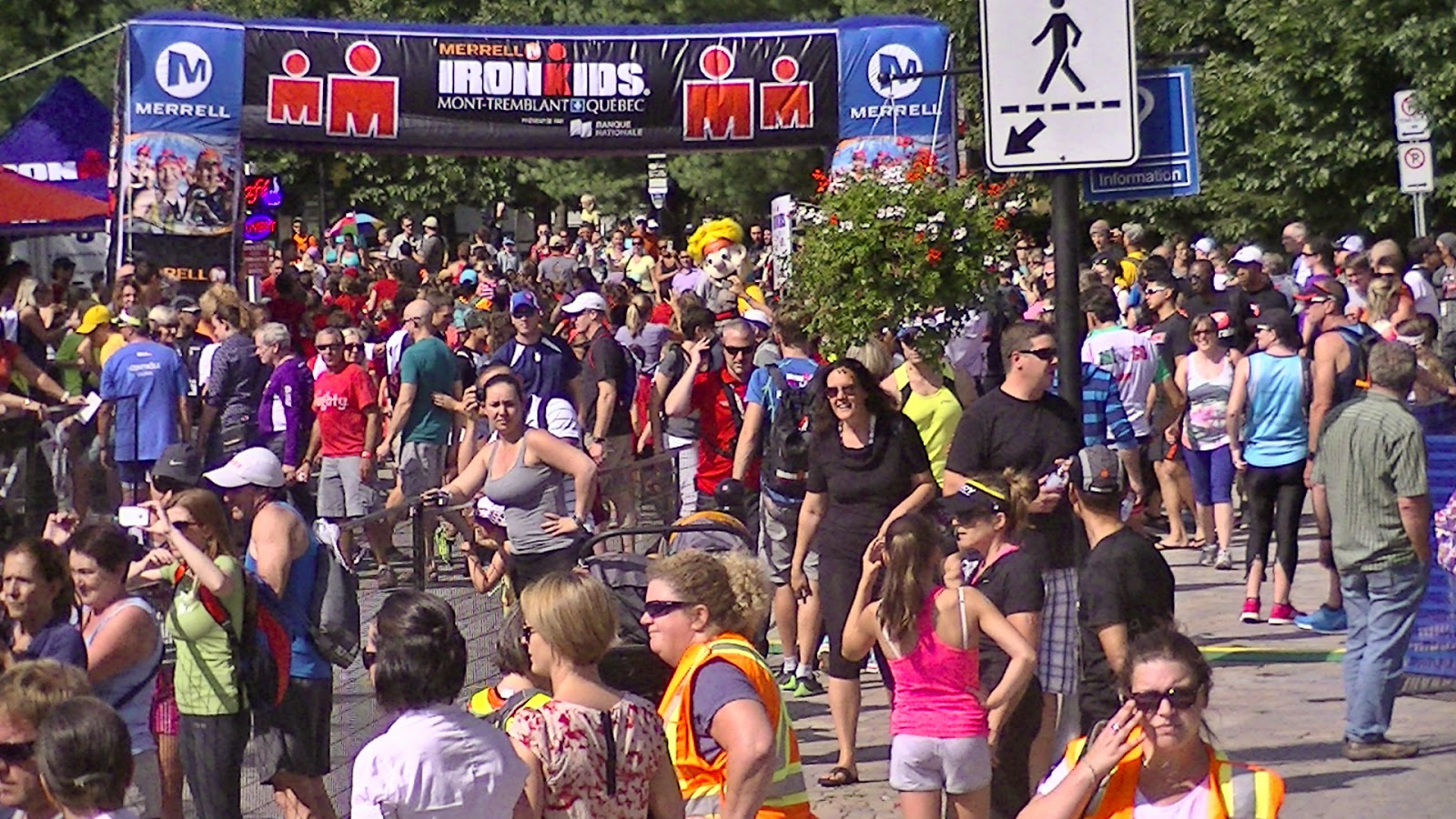 These last two pictures show how many people and kids were participating in the one mile run.  It was so nice to see how the community of Mount Tremblant supported hosting the half Iron Man World Championships.
Posted by Jaime at 6:14 PM