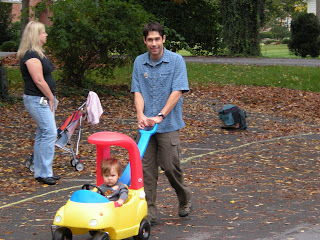 Here they are at the start. Hunter is warming up. 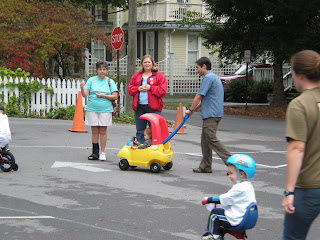 Making the first turn and getting lots of cheers from the local fans. 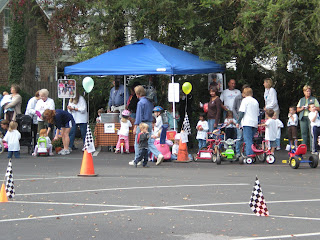 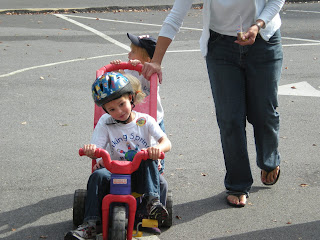 Our friends, Noah and Taylor 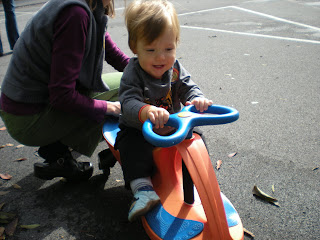 Hunter participated in a Trike-a-Thon this past week to help raise money for St. Jude's Childrens Research Hospital and to teach the children about the importance of tricycle safety. His preschool was sponsoring the event. It was so much fun and Hunter had a blast. Of course he is just a little too small to ride a tricycle, so he rode in his little car. At first he didn't know what to think about all the kids zipping around on bike, trikes, scooters, hot wheels--basically whatever a kid could ride on. After the first lap or so around the track he sat back with his sippy cup and goldfish and just enjoyed the event. The preschool had chalked off a 'track' in the parking lot complete with a water/juice and fuel pitstop. Hunter enjoyed the crackers and juice box from the pit stop station. Lots of our friends were there and it was good to see all the kids have such a good time. Thankfully, there were no major bump ups (as you can imagine how hard it was to keep a bunch of toddlers 1. All going the same direction, 2. all going in a circle and 3. the older kids from going 30 miles an hour!) We even made the local 6 o'clock news! David and Hunter have a cameo appearance and they both look very handsome on TV! Had we known this was such a famous event we would have washed his car!
Posted by Jaime at 10:28 AM