Well, David and I successfully completed the 2008 Shut in trail ridge run! I ran this race once before in 2005 and thank goodness I didn't remember how hard it was or I probably wouldn't have ever run it again. It is by far the toughest race I have ever competed in, but it is also the most beautiful. The Blue Ridge Parkway was a canvas of colors and I almost wanted to stop and admire the beauty of it all....but I was racing afterall! It was a good day and I finished 3rd overall among the women. I was amazed with my finish and time considering our limited training since becoming a parent. David and I were both tired from the physically demanding run, but were anxious to get home to Hunter. It was the first time we have ever left him overnight. GaGa and Papa came up to keep him and I think they had a really good time. Hunter was great and thankfully sleeping well. He has been sleeping great, all until the time changed. He has finally gotten back into his routine. I was beginning to think I was going to have to get up at 5am forever! We also had some special visitors for the weekend. Aunt Jackie and Unle Joe came to check out the house and play with mom, dad and Hunter. It was great to see them and we look forward to seeing everyone soon for the holidays.
In other news we had our first snow. It was beautiful, but a bit early for me. It didn't stick on anything but the cars, but it did snow off and on for the entire day. The weather is such a peculiar thing. One week it snows and the next week every day is beautiful, sunny and with highs in the low 70's. Hunter also had his first big boy haircut. Up to this point I had been trimming it, but when a little boy at the library kept referring to him as "she" I knew it was time to let the professionals take over. It is a little shorter in the front than I would have liked but overall it looks 100% better and he really looks like a little boy. He did great. The key to cutting a 14 month olds hair is to cut quickly! 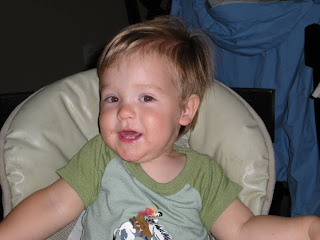 Hunter eating breakfast the morning after his haircut! 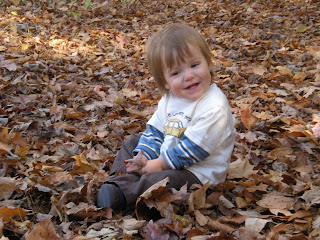 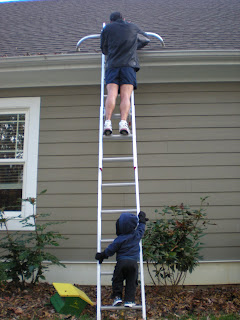 Helping Daddy clean out the gutters! 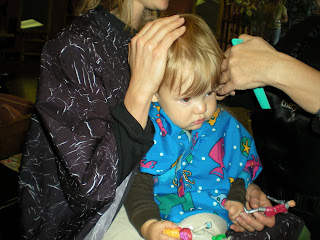 Getting our first hair cut! 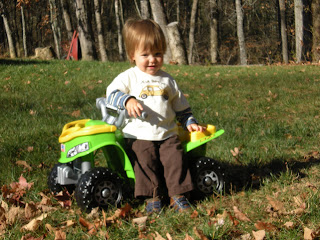 Our first 4 wheeler, which he isn't so sure about. 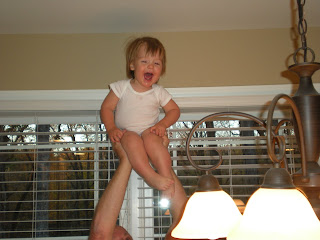 (I will have to post pictures of our run later. I can't figure out how to save them from the email our friends sent so just bear with me!)
Posted by Jaime at 5:54 PM