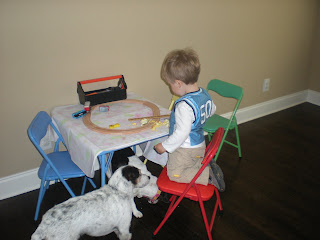 Abby and Ibis have learned to stay pretty close to Hunter at all times. He usually is a crumb dropper. In this pic we are done dying eggs and Hunter is dissecting one into a million pieces. The dogs are just helpful scavengers!


This has been the craziest weather day ever! On Sunday, Hunter and I enjoyed a nice run together on the Creeper Trail in shorts, it was around 80 degrees and sunny. Today, it has snowed off and on all day. Thank goodness the only accumulation is on the trees, but it is still really cold. I think we managed a daily high in the mid 30's. It snowed harder today than I have seen it snow all winter. It looked like a white thunderstorm outside! I think the rest of the week will be warmer...at least I hope. Hunter and I have so much more fun when we can go exploring outside.

Now, despite the weather, I must give a big shot out to my Carolina boys!! Yahoo, NCAA Champions!!! We are sort of a house divided being the David went to WFU and I to UNC for graduate school. Hunter is getting pulled in all directions, but as most of you know, Hunter is a big fan of mommy, so I think he will be a future Tarheel. We will also pull for the Deacons, except when they play UNC!!!

Since it has been such a yucky day we have had to be very creative with some cool things to do inside. I thought it would be great fun to dye Easter eggs. It was a lot of fun and Hunter loved it. It managed to keep him entertained for about an hour, which in toddler world is a really, really, really, did I say really long time! It was also a great big mess, but he had fun and so did I do I didn't mind cleaning and cleaning and cleaning. He also thought it was loads of fun to smash the eggs into million pieces with his tools (see first pic!). I guess this is just part of being a little boy. We had a good day! 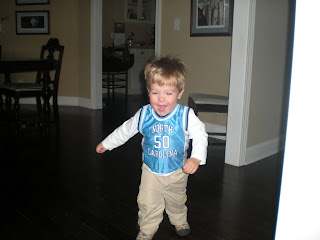 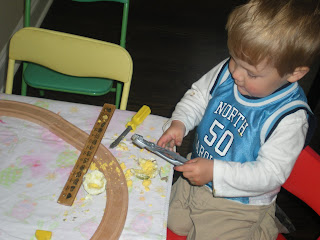 He worked and worked on this egg. It was such a mess and really stinky. He never tried to eat one. He just wanted to smash them all up. 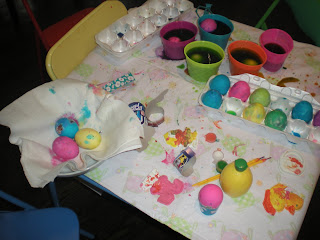 Our table after the fact. Out of 2 dozen eggs I think I managed to keep him from cracking around 8. The 3 in the bowl we the first saved...all the rest---cracked or smashed. 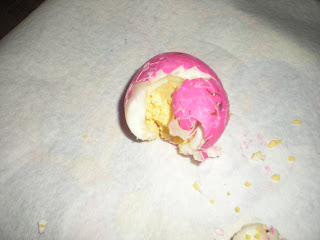 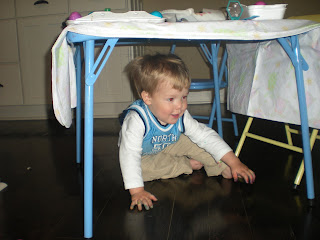 Then he thought it was great to hide under his table. I think he liked the table cloth hanging over the sides. He did have all his tractors under there! 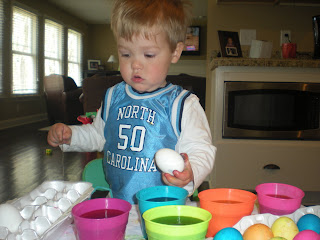 Working hard at figuring out how to do this. 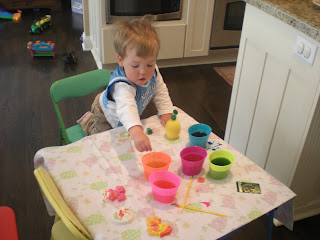 He was really good at using the egg dipper thingy. He never used his hands, just the dipper. I was surprised and proud of these fine motor skills! 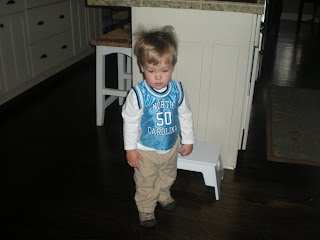 Poor little guy just had another haircut and it just sticks up all over the place until it grow out a little! 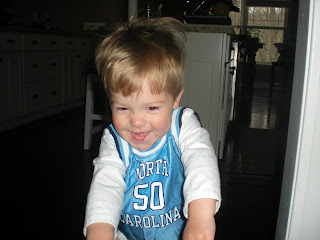